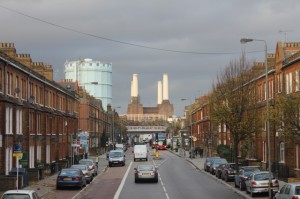 by our theatre critic BabyLonDon

Last night’s Wandsworth Borough Council Planning Committee meeting to approve the demolition of the Victorian Battersea Pumping Station and the demolition (and supposed replacement) of the iconic power station chimneys was the best show in town- Dickens in modern dress that occasionally lapsed into panto. The farce played to a packed house – with the corridors full of (vested?) interested parties straining to hear the proceedings over the PA.

The rather predictable plot- a variation on the turkeys voting for Christmas story -had a committee clearly determined to vote in favour spending three hours going through the massive planning application with just one dissenting voice of reason, played by a rather hammy councillor Tony Belton, pointing out the blindingly obvious flaws and unfeasibility of the scheme.

The real drama and humour lay in the fact that the committee seemed oblivious to the subplot- that the developers, REO (Treasury Holdings UK), are massively in “toxic” debt and in effect owned by the Irish tax payers via  NAMA and will do nothing but continue to demolish what little is left on the site and then “flip it”- selling it on as an empty brown field site for river front luxury development.

REO were unlucky that when the music of the property boom stopped they were left without a chair, but lucky enough to have their biggest non-Irish asset located in Wandsworth, infamous for having allowed the power station to fall into its current state of near dilapidation and for waving through truly hideous and desolate riverside developments.

There was something distasteful in the pathos of the affable officer’s naive presentation of the nonsensical scheme as from the public gallery hard nosed and cash hungry developers salivated at the easy meal they were shortly to enjoy.

There were comic moments as the “power dressed” committee members seemed to be made up of people who were in thrall to the promised dream of capitalism but had no clue about business. They dismissed the very real credibility gaps in the developers “vision”, enthusiastically hanging the whole wobbly edifice on the “promise” that these mega debtors (or at least Irish toxic debt vehicle NAMA) would stump up over 200 million pounds for the Northern Line Extension, or as it is known locally the “Ghost train to nowhere”. Even if this phantom train ride were real it would not happen for years even if it all went to plan… it was an evening of “even ifs”.

One comedic highlight was the officer’s report on the stringent “conditions” the council had negotiated with the Developers.

REO could take down the chimneys but must replace within 7 years.

REO could remove the embarrassing sight of the wharf cranes they are letting rot and could “restore” them inside the hulk of the rotting power station.

REO could first develop a slither of land on the north west river front. Happily the piece of land with most instant resale value, being the furthest from the smelly and polluting waste transfer facility on the north east water edge of the site and the cluster of huge gas holders on the south west edge, deemed by the HSE to be enough of a potential danger to society they recommended the scheme was rejected. This danger of an inferno seemed not to trouble the committee who dismissed the HSE’s concerns. One councillor mocked it as health and safety gone mad as residents of the later phases of the development nearer the potential blast would have chosen to buy their luxury flats aware of the risk.

They also swallowed, uncritically, the completely spurious argument for knocking down the grade II listed Victorian pumping station on the grounds it was a “community benefit” in order to “save” the power station apparently achieved by destroying its architectural value by knocking windows all along its sides and turning it into a shopping mall with luxury flats.

All of the responsibilities and commitments of REO were locked into phases of the development projected way into the future. As REO have no real intention, or means, to “deliver” these planning pipe dreams they were in effect getting off Scot free. The only thing the planning committee’s decisions would guarantee were the demolitions.

The press has been full of the glossy artists impressions of this bright new future but actually it is a dark day for most Battersea residents as this scheme will deliver nothing but another decade of planning blight. A bleak future without two of the regions most precious and best loved buildings.

The optimists had to accept that even if the Power Station were to survive this scheme it could not actually be seen from anywhere in the borough once surrounded by the 15+ storey buildings REO planned.

Given the power station is Wandsworth Borough council’s logo it was indeed a turkey landslide vote for every day being christmas.

BabyLonDon’s Final Verdict: Funny but sad. Not an “An absolute triumph”