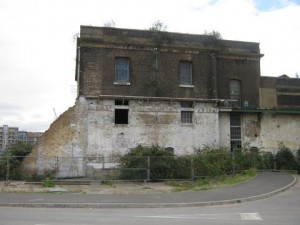 The Battersea Power Station Company, the charitable organisation seeking to protect the Battersea Power Station, have submitted their objection to Treasury Holding’s application to demolish the nearby Grade II listed Victorian Pumping Station. The pumping station is widely recognised as of historic and architectural interest by a wide range of authorities including: the Victorian Society; Save Britain’s Heritage; the Newcomen Society; the Council for British Archaeology;  the River Thames Society; the West London River Group; the Battersea Society; the Kew Bridge Engines Trust, and the Greater London Industrial Archaeology Society.

The only justification offered by REO (Treasury Holdings) is a spurious notion of “public benefit” where the developer is attempting to wrap up their desire to build a few extra offices or flats on the site as a “public benefit”. The only other, even weaker, argument seems to be the idea that the pumping station must be sacrificed in order to save the Battersea Power Station.  As the letter below makes clear there is no real connection. The owner has a duty of care for both Grade II listed buildings. Besides many critics would claim their plans to “save” the power station by turning it into a Westfield style shopping centre and knocking windows all along both side exterior walls is actually a mindless act of vandalism that destroys the building’s architectural integrity. Put together with REO’s application to demolish the chimneys and replace with plastic ones this is “development” 1960’s style. Is it also “conservation” 2010 style? Is there any imagination out there??

If you would like to register your objection it is never too late!

For the attention of Mr Tony McDonald

I am writing on behalf of the Directors to confirm our objection to this application to demolish the pumping station.

We wrote previously on 29th January 2010 to object, pointing out that one of our objectives as a company is the preservation of Battersea Water Pumping Station.

Many other organisations, with an interest in conservation, science and the river Thames have since written to you to object to this application.  The list is impressive:  including: the Victorian Society; Save Britain’s Heritage; the Newcomen Society; the Council for British Archaeology;  the River Thames Society; the West London River Group; the Battersea Society; the Kew Bridge Engines Trust, and the Greater London Industrial Archaeology Society

Given the near unanimity of opposition to the proposed demolition and support for retention and alternative use, we wrote to Treasury Holdings on 8th June to offer to buy the pumping station for a sum of £1.  The offer took account of the parlous state into which Parkview International, and now Treasury Holdings, have allowed the listed building to decline.  You have a copy of that letter and we would ask that you make special reference to it in your report.

Treasury replied to us on 17th June to refuse our offer, taking refuge in clause HE 9.2 (i) of the new government guidance on the historic environment PPS 5 which talks about the need to demonstrate “substantial public benefits” that would outweigh the harm caused by the loss of the heritage asset, ie the demolition of the pumping station.

Treasury have since produced a revised assessment report of the pumping station (September 2009) taking account of the recently revised and updated PPS5.

This report is essentially a detailed architectural and archaeological description of the building.  This merely serves to emphasise its significance of the building and the importance of keeping it.

The report goes on to extol the “substantial public benefits” of their proposals.  These are listed as: the retention of Battersea Power Station (with the implication that in some way the pumping station should be sacrificed in order for the Power Station to be saved) ; a “contribution” to the proposed Northern Line extension; and other “substantial” – but unspecified – benefits arising from the regeneration of the site.

The report goes on to argue that the demolition of the pumping station is necessary in order to “deliver” the public benefits of the proposals listed above.

There are various flaws in Treasury’s justification for the demolition.

Firstly of course, the retention of the pumping station and opening it to visitors is a substantial public benefit in itself.   It is moreover a practical and achievable goal with a tangible outcome.

Secondly, Treasury does not make it clear why they can’t provide both the public benefit of keeping the listed building and other public benefits as well.   It is not credible that this small building cannot be retained in such a large scheme on a 38 acre site.  Indeed Treasury’s total scheme, for instance as shown on the model in their offices, makes proposals for additional sites beyond the Battersea Power Station site itself.

Thirdly, it is misleading to suggest that all the public benefits accruing from the redevelopment of a 38 acre site will be jeopardised by the retention of the pumping station.  A more realistic comparison would be the public benefits that could be had in place of the pumping station itself.  Given the small size of the building this might be no more than a small office or 8-10 flats  (The higher figures Treasury quotes for loss of residential units are dubious, related to a notional  “30m exclusion zone to create a suitable setting for the retained listed building”.)

A further point, which you will no doubt tell us is “not a planning matter” – is that Treasury does not have the ability to provide the “substantial public benefits” that they claim, given that they are £1billion in debt.

This application is without justification or merit and should be thrown out.

Please will you now take steps to compulsorily purchase the pumping station and have it transferred to us.  We are the rightful owner of this building if Treasury no longer requires it.

We would also reiterate our previous request that you use your legal powers to require Treasury to secure the building from further physical deterioration and other threats.