Former Malaysian PM Najib Razak (pictured below sharing a joke with David Cameron and Boris Johnson)  has been charged with corruption over a ‘£3.4bn fraud.’ 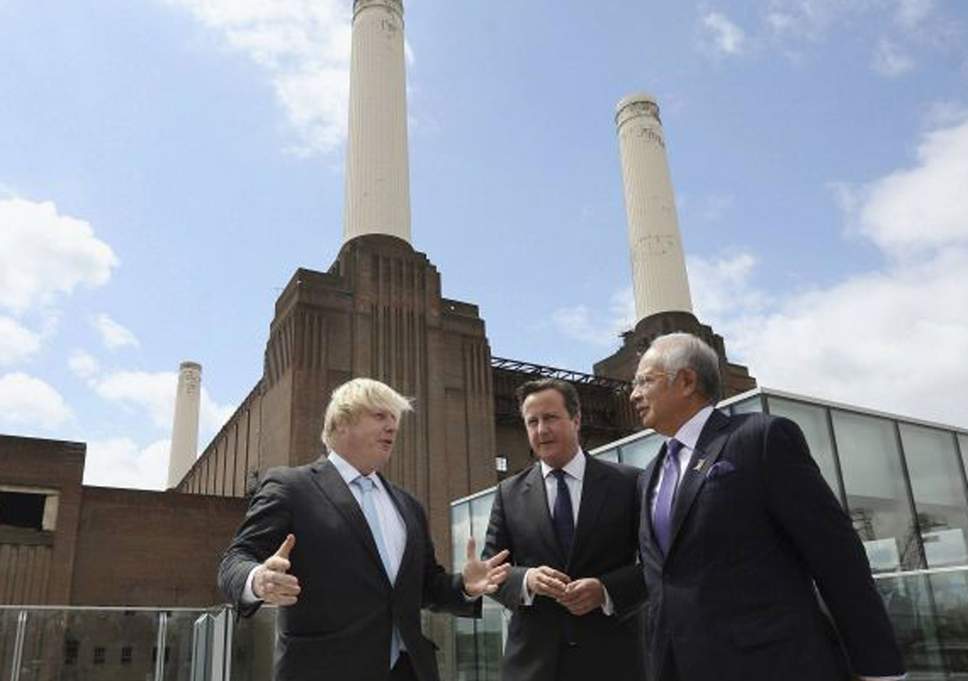 The purchase of Battersea Power Station, the biggest property deal in the UK, is under threat after Anwar Ibrahim, the new leader of Malaysia’s governing coalition said it would be investigated as part of “dubious” investments made by the previous administration.

“Anwar Ibrahim’s comments will raise questions about the British government’s commitment to fighting corruption. He said the money trail of the 1MDB fraud ran through London, with $1.83bn of Malaysia’s cash funnelled into a Saudi-British company.

“There was no attempt by British authorities to investigate. But this was a crime using sovereign wealth funds for reckless spending sprees.” he said.

“I say to Britain: you talk about transparency and anti-corruption drives, now is the time for action. I am saying now allow the institutions to conduct investigations fairly and give the necessary cooperation.”

Anwar Ibrahim, the opposition leader spent nine years in prison on charges which have been confirmed as trumped up and politically driven.

We ask how does this impact on the future of the building? The signs are not good. Despite being festooned with cranes there does not seem to be much going on at the site, just the continuation of the demolition by stealth. The east and west walls of iconic art deco brick work have gone. The London luxury property market has effectively collapsed. Many key individuals, including long time CEO Robert Tincknell, have left the Battersea Power Station Development Company (did they jump or were they pushed?).

Are we going to be left, as predicted, with a useless and worthless ruin surrounded by hideous and empty flats that no one wants to buy? Will the poor workers of Malaysia ever see their money back?

You can read more about Battersea Power Station on our blog and watch our film Selling an Icon here:

‘Battersea Power Station: Selling an Icon’ tells the story of Battersea Power Station from its prominence as a site of industrial power through the years of dereliction, speculation and planning blight to the replacement of the chimneys under the current scheme – a key example of developer-led preservation. In an age of aggressive ‘big business’ redevelopment, the film gives voice to the local communities who are rarely consulted and often overlooked.

Also available to purchase on DVD. For institutional buyers and public screenings, please contact us at distribution@spectacle.co.uk.