Our film Battersea Power Station: Selling an Icon, has recently been screened at Goldsmiths University, in Leiden as part of the LISFE Architecture Week, and at the 3rd International Congress on Industrial Heritage in Lisbon. These screenings have generated further interest in the tragic plight of this building and the detrimental effects of developer led conservation on listed buildings. Combined with the recent unveiling of the new Tate Modern extension, it raises questions over how the unlisted Bankside Power Station is protected by public use and interest, while the listed Battersea Power Station, still standing with just one chimney, is for private profit only. 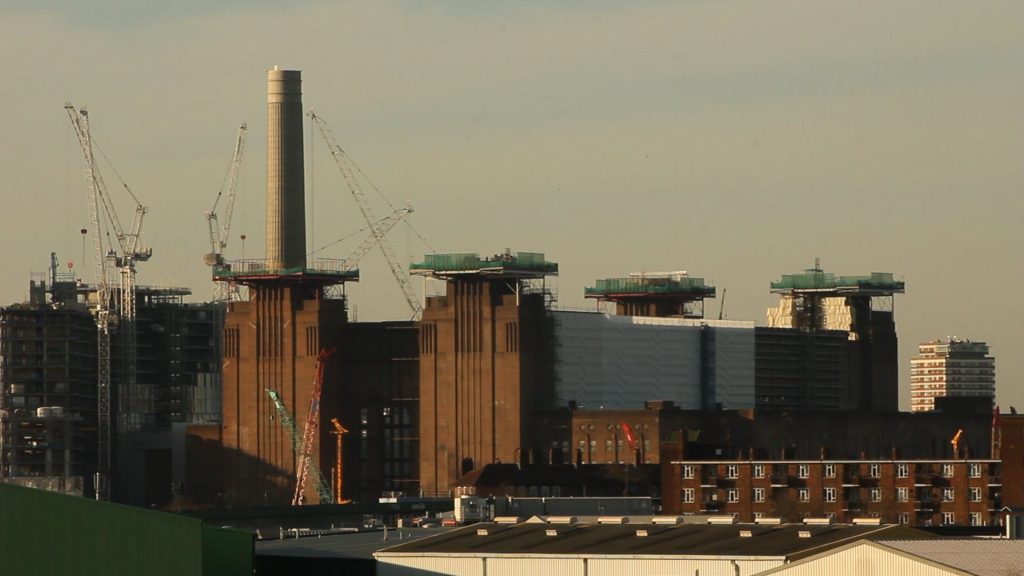 Both Bankside and Battersea Power Station were designed by Sir Giles Gilbert Scott, described as ‘cathedrals of power’, and considered of major architectural importance. And yet, when it came to development plans for both buildings, only Bankside’s value as a potential public asset was considered. When the Tate Modern acquired the building in 1994 to house a collection of modern art, it ultimately revitalised the area, while still maintaining the original character of the building. The transition from power station to art museum is today considered a huge success. Following the gallery’s £260m revamp, which was launched on June 17, the Chairman of the Tate stated that: ‘A building that was once London’s beating heart is now its cultural cathedral.’

However, as Garner and Murphy highlighted at the Lisbon conference, the development plans for Battersea Power Station don’t seem to be focused around the preservation of a listed Art Deco building, or the drive to create another cultural space like the Tate. Under the financing of Malaysian real estate investment consortium, led by Sime Darby, the power station will be swamped by high rise, luxury apartments, enclosed in a gated community and only accessible to the public during the day. As we have previously reported, the power station itself is in danger of becoming virtually unrecognisable, with growing concern over whether the iconic chimneys will ever be rebuilt. Unlike the regeneration of the Tate Modern, whose success is ultimately based on its inclusivity and openness, Battersea, as we have tried to highlight in our film, is becoming defined by its elitism and exclusivity. Despite Boris Johnson’s pledges that property developed at the power station would be sold to Londoners first, our investigations suggest otherwise, with findings exposing that 55% of the homes sold so far actually went to foreign money.

Battersea’s ‘regeneration’ threatens to be solely for the purpose of private economic gain. As Garner asserts, the developers have taken ‘no account of its (Battersea Power Station) dignity, reverence and serenity.’ The Battersea Power Station Community Group’s plans have ultimately been realised in the Tate Modern. However, the recent Switch House extension, a 200ft pyramid-like tower featuring three new galleries and a panoramic roof terrace, just reinforces how, if re-development and preservation had started with Battersea rather than Bankside, which is a third of the size, no such extensions would have been needed. Instead, funds are raised in order for the Tate to house 60% more artworks, whilst Battersea Power Station falls into further dereliction.

Through the re-circulating of our film, these issues of developer led conservation are once again being brought to attention. The way the Tate extension is being praised for transforming the building into ‘one of the world’s cutting edge art spaces’, only emphasises the stark contrast between the two power stations. Our film remains essential in raising an awareness that heritage led regeneration cannot, ultimately, be short-circuited, and that respect for the historic environment is paramount.