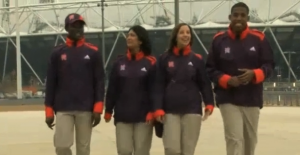 The 70,000 London 2012 Olympic Games volunteers have been told that they are banned from posting about the games on social media sites. The London Organising Committee of the Olympic Games (LOCOG) have released a document detailing what volunteers can and can not say. In the document volunteers have been asked not to mention details about their role, their location or about the athletes. However, this does seem to contradict British Olympic Association Chief Executive Andy Hunt’s statement that “The International Olympic Committee themselves are really pushing the use of social media and we support that“.

Jean Tomlin (LOCOG HR Director), who blogged in 2011 on the London 2012 website, said that the “Volunteers are the lifeblood of London 2012”. It certainly seems apparent that without the help and the passion of the volunteers, who are giving up their free time to ensure the success of the games, the London Olympics would not be possible. However, with such an infringement on civil liberties LOCOG certainly seem more than willing to dig a yet deeper hole for themselves.