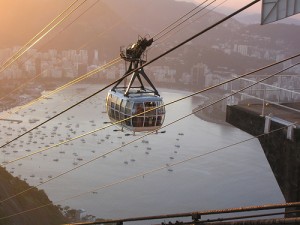 Transport for London (TfL) has confirmed plans to open a cable car in time for 2012 Olympics, operating 50 metres above water between the Greenwich Peninsula and Royal Docks. The cable car is to transport up to 5,000 passengers (cyclists and pedestrians) per hour, between the two Olympic venues (the O2 arena and ExCel exhibition centre). The duration of the trip will be approximately 5 minutes one-way, cars running every 30 seconds. According to the Guardian, the system will be privately funded, costing £25 million provided by a number of potential operators.

London Mayor Boris Johnson claims that “A cable car spanning the majestic Thames would not only provide a unique and pioneering addition to London’s skyline, but also offer a serene and joyful journey across the river”. “Passengers will be able to drink in the truly spectacular views of the Olympic Park and iconic London landmarks whilst shaving valuable minutes from their travelling time”, he continues. Johnson believes that the cable car will provide a much-needed enhancement of cross-river options to the east of the city.

Former Labour Mayor Ken Livingstone does not object to the idea, as a cable car would be a development for the area. However, he states that “what is really needed is a road bridge that would carry more commuters.” The other alternative types of river crossing , according to professors of transport, are a rail-only bridge, a new river-ferry crossing, a walk and cycle-only bridge, and a car bridge adapted to take more public transport. The professors claim that a cable car would be the most sustainable of these. The question here, however, is whether a cable car is the most realistic option? Or is this an attempt to keep up with other major cities of the world?

Barcelona, Cologne, Hong Kong, Lisbon, New York and Singapore are amongst the cities
currently employing a cable car. Does TfL feel that London is lagging behind? After the Olympics, will the public want to use the cable car as an every-day mode of transport? Not only does it sound unrealistic to think that the public will choose to “take the cable car” to work, but the route (from one place in the middle of nowhere to another) seems extremely Olympics-centred. Will the cable car be purely used as a way to impress the masses of tourists organisers claim will visit London in 2012? (In fact most host cities experience a drop in tourism during the Olympics) Quoting Tfl analysts, it certainly seems so: “A cable car would bring excitement and iconic importance, which would generate interest in tourist visits.” Let’s go fly a kite.

One thought on “TFL Confirms Cable Car for 2012 Olympics”