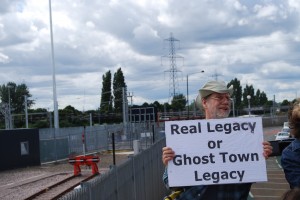 Further to our earlier post, the Future Communities blog  points out that the recent riots “diverted attention from the  decision by the Government and the Mayor’s Office to reject a £1bn bid by the Wellcome Trust to transform the Olympic Park into a science and technology hub.”

Instead of creating up to 7000 new jobs, turning the Olympic village into a new research and innovation facility, its sale to Qatari Diar and Delancey Estates, the two property development companies who have recently acquired it for £557m (with a staggering £275m loss) is a shortsighted one.

Unemployment in the east end boroughs of London are among the highest in London and the prospect of creation thousands of jobs for local residents is yet another wasted opportunity.