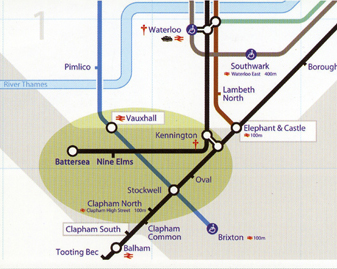 Sadiq Khan MP, Minister of State for Transport, confirmed that there are no plans to build the Battersea tube extension and no public money from either the Mayor or the government for such a scheme- dashing the hopes for the Battersea Power Station development.

Owners of Battersea Power Station, REO (Real Estate Opportunities), claim their plans for the Power Station, currently out for public consultation, depends on the extension of the Northern Line to a new tube station at Battersea (near to Battersea Park rail Station.)  Khan’s unequivocal statement bangs the nail in the coffin of a public funded tube extension.

Besides the recently announced £4 billion short fall in Transport for London’s budget the Battersea tube project was never likely to happen for a number of reasons.

The site is well connected by buses and only a short walk to Vauxhall and one stop by train to Victoria. Nearby Queenstown Rd Station connects in minutes to Waterloo and Clapham Junction.

While Battersea has long wanted a tube station a bizarre two stop branch from Kennington is not the answer. As a cul-de-sac it will either be a shuttle service or will have to have two platforms (or the shunting infrastructure) for tube trains to “turn around”.  What is needed is an integrated transport scheme.

For a tiny fraction of the cost extra buses or even a tram line could improve the connections between Victoria, Vauxhall and Waterloo, all more useful transport nodes  than Kennington on the already over crowded Northern Line. Overhead rail infrastructure exists but there is simply not enough rolling stock. The Victoria to London Bridge service that goes via Battersea Park Station has a useless two trains an hour. More frequent  trains could make it a very useful line. A bus linking Clapham Common tube, via Chelsea Bridge, with Victoria, Pimlico and Westminster tube stations would go a long way to integrating transport of the area.

Finally even with REO’s dense and greedy plans for developments all around the power station there will simply not be enough people in the station’s catchment area to make it viable. The proposed US Embassy would be as near to Vauxhall so why bother going all that way to Battersea tube simply to arrive at Kennington?

REO claim they are going to pay for the tube and it will not need public money but with debts of £1.6 billion REO are hardly in a position to engage in tunnelling, one of the construction industry’s most expensive activities. They do not seem to even have the money to repair broken windows in the Power Station.

The reality is that REO have made a seriously bad investment, they bought the site for £400m at the height of the property market. The previous owner had bought it for £100m only a few years earlier. The only way REO can recoup their investment is to demolish the power station. Without the power station the site is one of Europe’s biggest and most valuable inner city brown field sites. REO insist the tube line extension is key to their development but it is just a red herring that simultaneously wins support from locals keen for transport improvements and plays for time. It adds to the delaying tactic of perpetual deferment while the building is allowed to rot and fall down.

If you would like to object to the planning applications you have until January 31st 2010 click here for more details.