Screening of the documentaries The Truth Lies in Rostock and Despite the Sun are schedule for the ASA14 Decennial: Anthropology and Enlightenment conference running on Saturday 21 June and Sunday 22 June in the city of Edinburgh.

Both films, Despite the Sun (1986), an investigation into the year-long dispute, which shook the print industry, and The Truth Lies in Rostock (1993), one of the rare documents about the riots in Rostock-Lichtenhagen in August 1992, will be shown on Saturday 21 as part of the film programme ‘The truth of memory and the fiction of history: the politics of representation at the interface of anthropology, art and film making’. Furthermore, there will be a third screening of Spectres (2011), a film essay by Sven Augustijnen that explains one of the darkest pages in the colonial history of the Belgian Congo, around 1960.

This film session focuses on recent anthropological works that have argued that standard anthropological accounts can be inadequate to engage with contemporary socio-economic and political transformations. In questioning standard ethnographic practices, anthropologists have started to explore the relationship between facts and fictions, between truth and representation, and between individual and collaborative or collective projects. These new strands at the convergence between art, anthropology, history, film making and literature raise important issues concerning the limits of the production and representation of anthropological knowledge. This session aims to engage with these debates by presenting three films that in different ways respond to many of the wider conference themes.

The screenings will be followed by a talk and discussion with Mark Saunders, film maker and director of Despite the Sun and co-director of The Truth Lies in Rostcok. All film sessions will take place in the Lecture Theatre of the Symposium Hall.

Click The Truth Lies in Rostock for more blogs 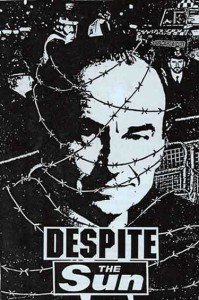