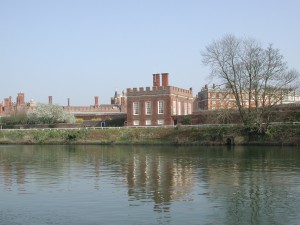 A new video has recently surfaced on youtube which gives a great summary of the problems surrounding the redevelopment of the Hampton Court site.
x
The video makes the point that urbanisation of the south bank of the river Thames will not  only mean destruction of a historic view of Hampton Court Palace, but will also make some people and companies very rich.
x
Hampton Court Palace lies in business secretary Vince Cable’s constituency of Twickenham. Mr Cable opposed the plans whilst in opposition, but since coming to power he seems to have lost his voice on the subject.

The video makes one point that should give us all cause for concern. The application itself is opposed by many factions, including Hampton Court. If Hampton Court is unable to oppose an inappropriate planning application then there is no hope for us commoners. A quick glance at the NDPB top earners’ list reveals that 3 out of the top 9 earners’ are in fact on the ODA (Olympic Delivery Authority)’s ‘senior team’. David Higgins, chief executive of the ODA, is officially the highest earning civil servant in the land with a whopper of an annual salary of between £390,000 and £394,999. John Armitt, chairman of the ODA board also made it into the top earners’ list and these 4 along with 5 other ODA senior executives each earn more than the UK Prime Minister, himself on a comparatively measly £142,500.

With such a big pile of Olympic gold split up between the senior executives, one wonders why those 78,000 unpaid Game Makers can’t be given a slice of the pie. Considering these volunteers will not be given the pleasure of watching the games themselves during their ten days of unpaid labour and further three unpaid days of training, one would think it’d be at least courteous to offer them more than a few free McDonalds lunches and free travel on working days.

It would seem that the winning team have already been decided, they’re up in One Churchill Place in Canary Wharf it would seem…