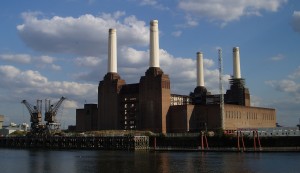 Grade I and II* industrial listed buildings in England cover a variety of structures from across the industrial spectrum including Battersea Power Station.

According the English Heritage the problem is not a lack of appreciation from the public. A poll of public attitudes carried out on their behalf shows that 86% of the public agree that it is important we value and appreciate industrial heritage and 80% think it is just as important as our castles and country houses.

Despite English Heritage’s obvious concerns about the future of listed industrial heritage sites, it seems that they have some problems categorising the status of some of these sites.

Their 2011 Heritage At Risk Register lists both Battersea Power Station and the Victorian Battersea Pumping Station as “Priority D”. This means “Slow decay; solution agreed but not yet implemented”. Which is ambiguously incorrect on both fronts.

The report does correctly state that this historic Victorian Pumping station is going to demolished, despite widespread and authoritative opposition, after a planning application was approved by Wandsworth Council in November 2010. So what English Heritage really mean is, it’s going to be knocked down but it hasn’t been done yet. The pump station is crucial, the only reason to demolish it  is it allows the power station owners REO,  to maximise profits. Apparently completely ignoring Malcolm Tucker of the Greater London Industrial Archaeology Society  who previously made it clear “that it should be possible to incorporate the conserved building within the scheme.”

There are two problems here: 1, “D” has been the status of the power station for decades now and little has changed. 2, the fact that legal agreement is required means that a solution has not been agreed.

Priority D is therefore the developers ideal status. Using the “big bang theory of redevelopment” implementation of the “solution” can be almost permanently postponed. Rather than phased conservation and restoration the heavily indebted REO insists their preposterous scheme to “save” the power station depends of a new tube line being dug, which of course will never happen.  They claim that their “solution” to restoration depends on the creation of a whole new urban area- a scheme that looked unlikely even in the height of the property boom.

Meanwhile the building falls into decay and eventually will require demolishing for safety reason giving the developer a clear conscience and nice clear piece of land to build on. Never mind that the nation loses one of its most iconic industrial buildings that are ‘as important as our castles and country homes”.

Of course the developers could “moth ball” both buildings until such time that a genuinely appropriate and viable solution comes along, but there is no need to speculate on why they won’t do that. 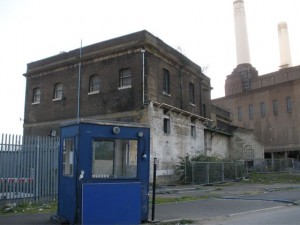 Listed but not protected

The usual safeguards against demolition of a heritage building are under scrutiny as REO, “developers” of Battersea Power Station, seek to bypass the criteria for demolishing a listed building and bulldoze the Victorian Battersea Water Pumping Station. Under new policy guidelines, REO will no longer need to administer the test criteria before destruction of a heritage site. REO state they “are not seeking to justify demolition on the basis of Policy HE9.2(ii)” Conveniently, REO is not in violation of policy and in effect giving them the right to proceed without obstacle.

A summary of the criteria for demolition under Policy HE9.2(ii) of PPS5 are to prove they are unable to:

Furthermore, under the new policy, REO “justifies the demolition of the water pumping station by reference to Policy HE9.2(i) of PPS5. Our position is that the demolition of the pumping station is justified by the delivery of the substantial public benefits inherent to the regeneration scheme [REO] are promoting, that outweigh the building’s loss, and that retention of the building would compromise the delivery of the comprehensive scheme.”

REO’s superfluous argument that the water pump station must be demolish or it will jeopardize the entire regeneration project for this area remains unfounded.

In fact, there are approximately 20 hectares of land for redevelopment.  It is perplexing that the developers are not willing to revise their plans for redevelopment to include the heritage site. Alex Baldwin of the Victorian society confirms that the demolition of the site would be a “considerable loss and unnecessary waste of a valuable historic building.” She goes on to say that the Battersea Water Pumping station is “integral to the redevelopment and regeneration of the area.  Demolition would degrade the area of the site and call into question the listing process as a whole.  The developers have not fulfilled the testing criteria for demolition, nor have they gone through re-qualifying their scheme for regeneration.”

Examples of successful redevelopment of historical sites can be found in Nottingham, Crossness in East London, Abbey Mills, and Dean Clough Mills in Halifax. The rejuvenated historical sites have revitalized the community and the same could be done for Battersea. Governments should include historic sites in the redevelopment schemes and not deem them mutually exclusive to the social and economical regeneration linked to a community.

By proceeding with the redevelopment proposed by REO, a precedent is set forth in how to undergo regeneration schemes in London. It is not good practice to use this as a blank slate for developers to demolish historical sites for the profit of a selected few. It is imperative to uphold government policy regarding the demolition of these irreplaceable iconic symbols. Once they are gone, we will never be able to get them back.