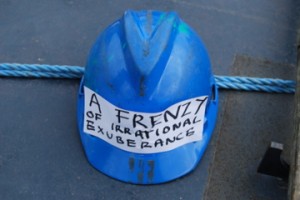 Against what The Telegraph described as a ‘bizarre backdrop of two pink flamingos, a peacock, a black swan and 1500 security police,’ its aim was to strengthen the relations, collaboration and partnership between National Olympic Committees and governments around the world.

Moynihan and Coe spoke to over 2,000 politicians and government representatives on the subject of key players working together in partnership to deliver both the upcoming and future Olympic Games, drawing on their joint experience as members of the London 2012 Olympic Board.

The delegates were all there to debate an 11-point plan for governments and sport to work together as well as providing a forum for countries to voice concerns. These ranged from fireworks at the London Olympic Games opening ceremony and the uncertain promise of flexible economy class airfares for each athlete and official coming to the London Games to doping, corruption and the use of sportsmen and women as pawns for political ends.

“Sport is not immune from politics. Sport is not an island. But it should never be the target for politicians wishing to demonstrate a political point,” emphasised Lord Moynihan in his speech.

“While we should respect the rules (of sovereign states), we should seek a sphere of ‘responsible’ autonomy to act freely in full respect of Governments and governmental authorities…..the right to self-government, to organise one’s activities and to manage them without external intrusion and instruction is critical to the survival of the Olympic Movement. This is where the autonomy of sport needs protecting.”

But underlying the official business and cocktail politics is Seb Coe’s future, post-2012. He needs to get elected onto the Board of the International Olympic Committee to continue his work in the international sports arena and the only way to do that is by becoming President of the International Association of Athletics Federations (IAAF), a post currently held by Senegalese Lamine Diack and then his next-in-line Vice-President, former pole-vaulter Sergey Bubka.

Since the devastating oil spill earlier this year, BP (British Petroleum) have found it a little difficult to big up their green credentials. Unsurprisingly, the International and US Olympic Committees (IOC and USOC) have spoken up about their continued support for BP. Or perhaps more specifically, continuing their support of the BP sponsorship which floats around the figure of £50 million they received a short while ago.

Other illustrious London 2012 sponsors include Dow Chemicals, Coca Cola and BMW… As previously mentioned on the Spectacle blog, the official 2012 Olympic sponsors reads like a who’s who of greenwash and corporate irresponsibility. But as long as Sebastian Coe is happy and the Olympics are still rolling into town, who cares?