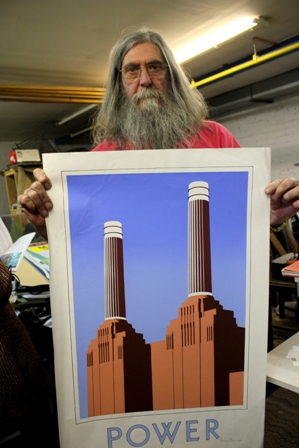 As Chairman of Battersea Power Station Community Group Brian Barnes has fought for the power station for 32 years.

The Battersea Power Station has without a doubt a special place in many Londoners hearts. It has this word presence – not many buildings have been featured in popular culture as much as the iconic building based on a river side site next to Thames.

Now the power station is facing a massive re-generation scheme led by the Battersea Power Station Development Company, a Malaysian consortium in charge of the ambitious building project. The scheme has stormed critique especially among local residents. 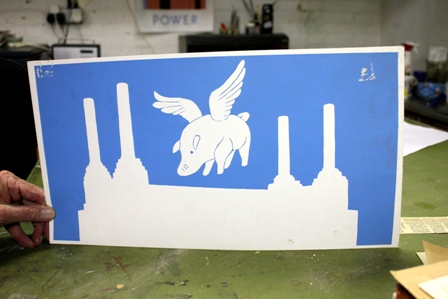 However the pig isn’t the only animal Brian has used in his artwork. Orangutangs have also been a common feature in Brian’s art inspired by the power station. This is because one of the companies that owns the power station, Sime Darby – one of the biggest palm oil producers in the world – is cutting down a rainforest in equatorial zones and destroying the natural habitats of orangutangs.

“If they can do that in Borneo and threaten the rainforest and the orangutangs, I don’t think they are going to be much bothered about a building of brick”, Brian adds.

“On Valentine’s day we put up a big ‘Love’ banner up on the chimneys with a heart on it. That got everyone interested in loving Battersea Power Station”, Brian says. The 45 foot long banners which the Community Group members strung up between the chimneys have also said ‘Love me’ and ‘Help me’.

Brian believes that art helps to galvanise people’s attention to the power station and what’s going on: “Whether the chimneys are coming down or whether there is too much luxury housing around it or whether the tube station is really going to be useful for the local people”. 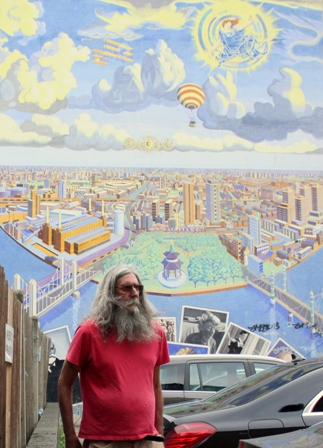 A mural ‘Battersea in perspective’ was made in 1988. The mural including Battersea Power Station ‘is all about the Battersea area and people who are famous of being Battersea residents’ Brian says.

“Battersea Power Station missed out being an art gallery because it didn’t have a roof” Brian says referring to the Bankside power station which now serves as the Tate Modern.

Perhaps art cannot save the Battersea Power Station. However it has spread the message of what is happening and helped social change by being a part of a wider campaign. “I used it (Battersea Power Station) as an image to represent Battersea”, Brian says and what is sure is that his campaign to save the power station isn’t over yet.