Does the Truth Still Lie in Rostock?

In August 2020, in collaboration with the Rostock based group Lichtenhagen im Gedächtnis , Spectacle developed and ran an archive-based two-day participatory workshop. This project is part of the run up to the 30th anniversary of the Rostock Pogrom in 1992.

The project’s events, which were held online due to the pandemic, included a public premier of a new fully German version of ‘The Truth Lies in Rostock’. The screening was followed by a Q&A with director Mark Saunders, which focused on the participatory production process through which the film was created. For more about the process or the archive footage, see the bottom of this post.

This screening also launched a unique workshop designed to connect Rostock’s past, present, and future.

The Truth Lies in Rostock

This 1993 film depicts the events which occurred in August 1992, at the Lichtenhagen estate in Rostock, in the former East Germany. Over the course of three nights, a fascist crowd assembled. The police withdrew as the mob petrol bombed a refugee centre and the home of Vietnamese guest workers while 3000 spectators stood by and clapped.

The film uses material filmed from inside the attacked houses and interviews with anti-fascists, the Vietnamese guest workers, police, bureaucrats, neo-nazis and residents. Through these perspectives, a story of political collusion and fear unfolds.

Thirty years later the question has become, how can the memory of the ‘Lichtenhagen Pogrom’ help fight new waves of fascism in Germany?

This two-day participatory video workshop offered the chance for young adults from Rostock to dig into the film’s questions about the nature of fascism, racism, and the roles and responsibilities of the city, state, and federal governments.

By working with archive footage and filming a live commemorative demonstration, the workshop was designed to bridge the past and present issues of racism and anti-racism in Rostock. The workshop’s second aim was to offer new skills in media and filmmaking to these young adults.

The workshop launched the weekend of August 20th. A group of young Rostockers were split in two groups, one working with archive footage, and one filming the live demonstration.

Before the workshop began, Spectacle digitized a portion of our extensive archive footage from 1992. The material selected was of the anti-nazi demonstration that followed the pogrom. This group worked with Spectacle to edit a new short film from the material.

You can see their short film here: Demonstration 1992

Meanwhile, the rest of the participants went as a small group to film an event which echoed the archive material – the Lichtenhagen Commemorative Bicycle Demonstration. This group of participants learned about filming techniques and edited footage from the demonstration into a short film which focused on the landmarks which have been built to commemorate the events thirty years before.

You can view their final short film here: Demonstration 2020

The Aims of the Project

Spectacle has an extensive archive of footage from Rostock between 1991-93. The archive grew out of a programme of participatory video workshops run by Spectacle. After the unification of Germany, all the East German media outlets were taken over or replaced with Western media. Spectacle’s series of open workshops were designed to establish an independent, community-based media group in Rostock and to document the effects of unification on the city.

All participants in the workshops were beginners, with little experience in photography or filmmaking. The practical exercises concentrated on how the unification was changing the physical urban landscape. At the close of the first sessions, each participant was interviewed about their experiences as well as their hopes and fears of “Die Wende” the unification of Germany.

One of the objectives of the workshops was to establish a community media group to that end we formed the Jako Media Co-op. Just six months later Jako E.V. and Spectacle would rejoin to make ‘The Truth Lies in Rostock’.

The production process created over 200 hours of footage that did not appear in the final edit of the film. These scenes of daily life in 1991-1993 have become an historic archive of the city at that volatile time. The aim of the 2020 project was to re-work and revisit this archive together with a new generation of Rostockers who were not even born at the time of the pogrom.

Visit our vimeo channel to see examples of Spectacle’s past PV work.

Are you a small, socially engaged organisation? Do you want to promote the great work you do using video? You have no money to commission a promotional video nor enough confidence or equipment to produce in-house engaging video content? Do you have your promotional video idea in mind and need help to make it real?

Spectacle wants to support you by skilling you up while helping you produce your amazing first promotional video!

We are a small, socially-minded company whose profits go back in to funding our community based work. We therefore want to support other organisations with a bespoke programme that will help you produce your first video while being trained in video making. We have applied a generous discount to our standard prices in order to help you reach your aims and to contribute to your success.

Spectacle is an award winning independent television production company specialising in documentary, community-led, investigative journalism and participatory media. Spectacle’s documentary work has been broadcast and exhibited internationally. We have produced work on commission for clients including Amnesty International, the Joseph Rowntree Foundation, the Howard League for Penal Reform, Council of Europe, Groundwork, the London Health Commission, the NHS, Big Local and the Wellcome Trust.

As well as undertaking productions, Spectacle runs short, sharp, affordable training courses and community based media workshops. We are based in London but can travel within Europe to deliver bespoke group sessions. We believe our courses are the best around, largely based on the exceptional feedback we have received from the hundreds of people we have trained over the years. 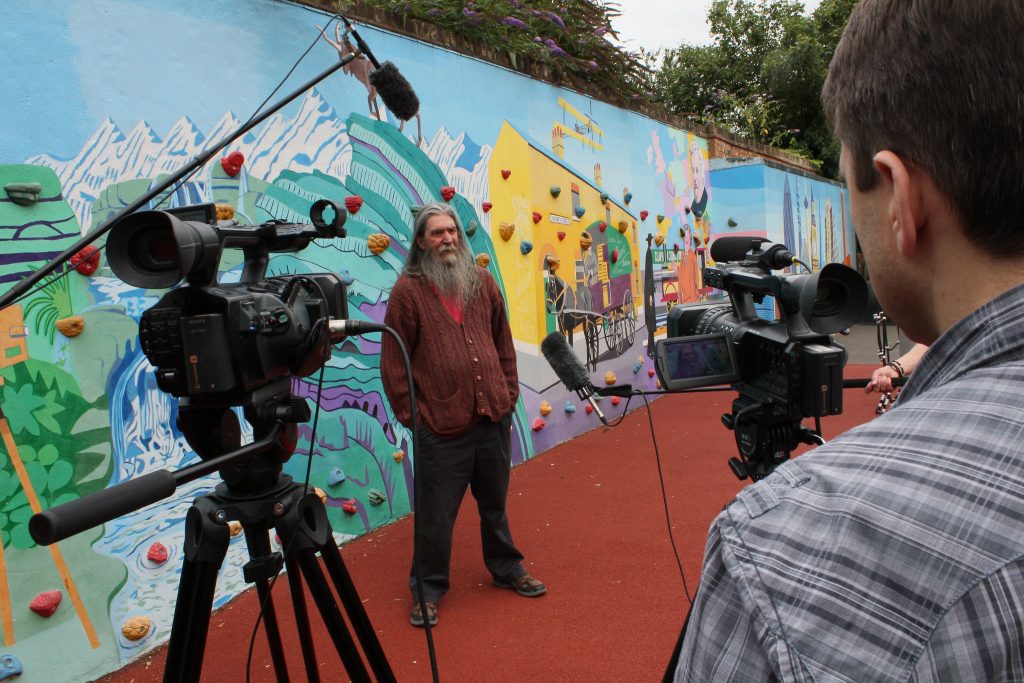 What will you get?

You will have your first video professionally produced by an award winning production company. You will also learn how to make your second video, building up confidence and practical knowledge that will scale up your outreach and marketing strategies.

What services are provided?

We are offering a bundle of services that will guide your staff (up to 8 people) through a specifically designed programme of training and production based on your video project.

You will attend practical workshops on video making and you will be assisted in your real shoot by our director. You will have complementary equipment (second camera, audio recording, lights) and extra crew if needed. Then we will train you on how to effectively use video editing software, sitting together  in front of your project to get the editing process started. Our professional editors will finalise your video and guide you through uploading and promoting it on you social networks and media platforms. 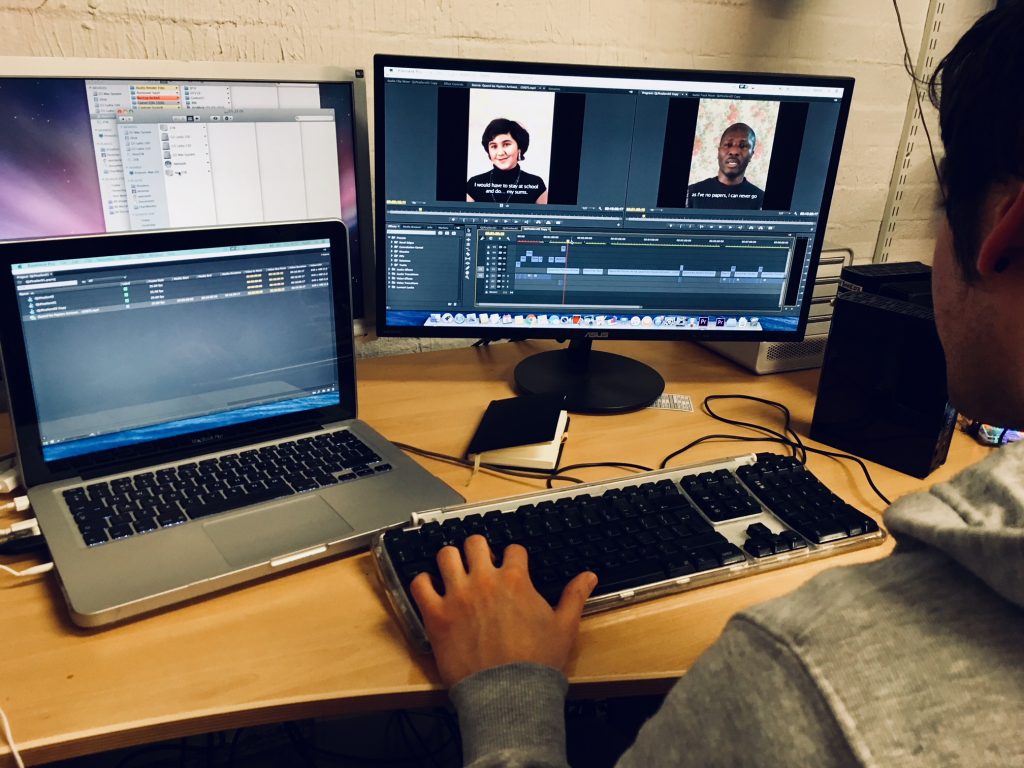 We are offering two options, depending on how confident you are already in video making and on the nature of your projects.

1 Day Shooting (assisted with extra equipment and crew if necessary)

1 Day Shooting (assisted with extra equipment and crew if necessary)

For information on Spectacle training courses

Are you looking to have your conference, seminar, event professionally filmed? Are you looking for an experienced, reliable and affordable company to deliver a high production value short film? Spectacle’s highly skilled crews provide high quality single or multi-camera videography at competitive prices to suit all your needs and budgets.

Spectacle is an award winning independent television production company specialising in documentary, community-led investigative journalism and participatory media.  Over the last 25 plus years, Spectacle delivered a variety of media products that have ranged from conference documentation, to short educational or promotional videos, from series of mini clips to longitudinal documentation of large social projects. Our list of clients range from broadcast channels and media companies to international NGOs, Charities, Universities and private companies and we have always received great feedback.

Filmmaking and video production can be a long and arduous process; Spectacle’s processes are transparent and ensure consistent contact and input with clients. This means that projects can be constantly monitored and evolved with the client. Our multi-skilled freelancers are familiar with a range of production equipment and post-production software, allowing a wealth of options for final outcomes and diversity of expertise in project management.

Spectacle offers professional full HD video and photographic production and documentation services for online, print or DVD distribution. Our crews have experience of a variety of broadcast and non-broadcast productions, and are used to working in sensitive and difficult situations. We also have experience in working with educational and academic institutions.

Our editors are familiar with academic work environments, especially in the fields of anthropology, urbanism and humanities, enhancing our ability to deliver a reliable service for your conference or educational videos. Our team of freelancers also cover a variety of languages enabling Spectacle to be the perfect partner for non-English speakers.

We can tailor our videography services to your needs. Single camera or multi-cam shooting, sound and light setting, interviews and vox pop, locations shots for higher production value: we are happy to discuss the best and most cost effective option to suit your needs. Whatever your choice in terms of crew and film typology, we value quality and do our best to deliver the best standard of service. For this reason all our services provide a full HD video recording and a sound operator to provide the best audio recording to your film. We also provide, when necessary, a basic extra light kit for all our video shooting.

Spectacle offers a sliding scale, depending on funding and size of production. Our range of production options starts from £450 to cover videography for your seminar with full HD camera, sound operator and lights.

Get in touch by email: production@spectacle.co.uk