Outside the Law: Stories from GuantÃ¡namo 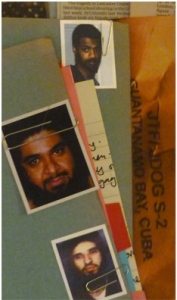 Electronic Press Kit for 'Outside the Law - Stories from Guantánamo'

This page includes a press release, a hi-res downloadable poster to edit for your own screening, images and the Trailer - Outside the Law: Stories from Guantánamo

For reviews visit the review page.

For full credits and ordering copies on DVD visit our catalogue page.

For dates and details of screenings visit the Spectacle Events page.

If you need any help please contact us at: distribution@spectacle.co.uk

Outside the Law: Stories from Guantánamo

The film is based around interviews with former prisoners (Moazzam Begg and, in his first major interview, Omar Deghayes, who was released in December 2007), lawyers for the prisoners (Clive Stafford Smith in the UK and Tom Wilner in the US), and journalist and author Andy Worthington, and also includes appearances from Guantánamo’s former Muslim chaplain James Yee, a London-based Imam, and the British human rights lawyer Gareth Peirce.

Focusing on the stories of three particular prisoners -- Shaker Aamer (who is still held), Binyam Mohamed (who was released in February 2009) and Omar Deghayes -- “Outside the Law: Stories from Guantánamo” provides a powerful rebuke to those who believe that Guantánamo holds “the worst of the worst” and that the Bush administration was justified in responding to the terrorist attacks of September 11, 2001 by holding men neither as prisoners of war, protected by the Geneva Conventions, nor as criminal suspects with habeas corpus rights, but as “illegal enemy combatants” with no rights whatsoever.

For further information or interviews, or to arrange a showing of “Outside the Law: Stories from Guantánamo” in the US, the UK or elsewhere, please contact:

Andy Worthington is a journalist and blogger, and the author of three books, including The Guantánamo Files: The Stories of the 774 Detainees in America’s Illegal Prison (Pluto Press).          www.andyworthington.co.uk

Spectacle is an independent television production company specialising in documentary, community-led investigative journalism and participatory media. Spectacle programs have been broadcast across Europe, Australia and Canada and have won international awards.          www.spectacle.co.uk

Cageprisoners Ltd is a human rights organisation that exists solely to raise awareness of the plight of the prisoners at Guantanamo Bay and other detainees held as part of the War on Terror.  We have the backing of both Muslim and non-Muslim lawyers, activists, former detainees, families of prisoners and academics.
www.cageprisoners.org

Guantánamo Justice Centre is a non-governmental humanitarian establishment, based in Geneva. Our main intent is to support and protect the rights of Guantánamo Bay victims – particularly after their release. Many of the former prisoners and members of GJC are actively involved with relatives, legal teams and human rights organisations in seeking justice for the remaining Guantánamo prisoners. GJC will seek to empower and assist the Guantánamo returnees in rebuilding their lives.  www.guantanamojusticecentre.com