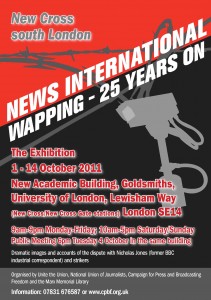 The News International Wapping dispute exhibition finishes its run in Liverpool today and moves to Goldsmiths College in south east London in October.

The bitter 1986 dispute between Rupert Murdoch and the print unions started when over 5,000 production and clerical workers were sacked overnight. None of the journalists were sacked but more than 100 of them – the “refuseniks” – took a stand on principle and walked out of their jobs.

The exhibition starts on 1 October with a public launch on Tuesday 4 October at 6pm featuring speakers who were directly involved in the dispute.

Further details can be found on Goldsmith’s website or for the Guardian’s Jon Henley’s article on the exhibition, click here.