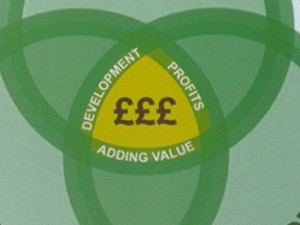 Even if you take the question in its strict financial sense, it’s not as simple as you might think.

Property consultants King Sturge valued the site at £388m in February of this year. But read the small print and you see that this value depends on some factors which are still in flux: the obtaining of planning permission, the extension of the Northern line to Battersea, and the availability of funding for REO’s huge debts.

To take the first issue of planning permission, that’s a decision that’s going to be made by Wandsworth Borough Council later this summer.

And it might not be as cut and dried at the developers hope: several groups are opposing the plans, including the Kew Bridge Engines Trust, 20th Century Society, Battersea Society, SAVE, and the Greater London Industrial Archaeology Society. The Victorian Society have also made a formal written objection and recorded an interview with Spectacle on their attitude towards the developers’ plans.

Even supposing the planning proposal is given the go-ahead, it’s unclear how valuable the site will be, given REO’s reluctance to say what proportion of the site will be made up of affordable housing.

Even now, when the site has none of the “essential” planning permission in place, the valuation of £388m suggests a value-per-acre of £10m. A little high, perhaps, given that Capital & Counties exhibition centre in Earls Court, which already generates income and has ready transport links, is valued at £6m per acre.

This second point of transport links, and the extension of the Northern line to Battersea, is also up for discussion.

No public money is being put towards it from either the mayor’s office or the Department of Transport, so it looks like it would have to be privately funded. The REO’s estimated cost at the moment is £200m – seen by some as a hopelessly optimistic figure.

And even if the price of building the tube link remained on target, it’s uncertain where REO would find £200m, given the company’s unfortunate financial position and hefty debts.

It’s hard to see how a valuation of the Battersea Power Station site, and of its worth to the developers, can be at all conclusive. £388m is an attractive figure for a company mired in debt, but to anyone else it looks optimistic at best, and at worst completely unrealistic. It is also £12m less than REO paid for the site.

One thought on “How much is Battersea Power Station worth?”