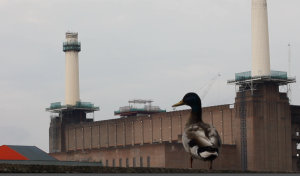 Where the Ducks the Chimney? Battersea Power Station 2015

Spectacle has announced that work has begun on its new film about Battersea Power Station, commissioned by the World Monuments Fund and American Express. The film is due for release in Autumn 2015.

The film will look at the historical and architectural significance of the power station, as well as the tireless efforts of the Battersea Power Station Community Group (BPSCG) which have led a grassroots campaign to preserve the building for the public good since the early 80s.

Working with the BPSCG, the film will raise awareness to the plight of building preservation in an age of redevelopment. The redevelopment of Battersea Power Station has aroused a passionate and highly-charged debate about whether – and how – iconic buildings should be governed, preserved, modified or replaced, and ‘who’ they belong to. As Colin Thom concludes in the Survey of London Chapter: “Perhaps more than any other structure today it represents the impotence of the heritage lobby when faced with big business at its most rapacious.”

The film will follow this debate in an even-handed, factual and interesting way, becoming a case study for similar issues in other cities around the world where a historic building finds itself on a high value site.

From gracing the covers of a Pink Floyd album to generating a fifth of London’s energy at its height, Battersea Power Station is a creation steeped in industrial history and rich in meaning. With stunning imagery throughout the ages – some from Spectacle’s archive and others newly shot – the film will reveal, in a unique manner, some of that history and meaning. It will raise awareness to the needs for preservation and the current challenges faced by conservation.

Spectacle is an award-winning independent television production company specialising in documentary, community-based investigative journalism and participatory media.  Spectacle has been documenting the changing landscape around Battersea Power Station for the past 15+ years.