English Heritage have given their blessing for the Victorian Battersea Water Pumping House, on the site of Battersea Power Station and which once housed a 112 inch Cornish engine, one of the largest steam engines ever built, to be demolished. 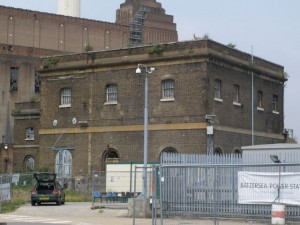 The current planning application submitted by Real Estate Opportunities ( Opportunities for them no doubt) includes plans to delist and demolish Battersea Water Pumping House. In fact in all their models and plans the building has been swept away- pre-empting the permission. It is outrageous that English Heritage have swallowed, hook line and sinker, REO’s argument that one listed building ( The Pump House) needs to be demolished in order to save another ( The Power Station). English Heritage know nothing of business and should be a little bit savvy about the tricks of property developers who nearly always want to rid themselves of any listed buildings that interfere with maximising profits.

Listed building consent for the demolition of the building was previously given in 1997 and renewed in 2002.  Battersea Power Station Community Group made objections on both occasions and also 1n 2002 opposed the demolition (on spurious “health & safety” grounds) of the boiler house of the pumping station.

Since 2002, Parkview’s scheme has collapsed and there is a different developer, with a new scheme.  The justifications given in 1997 and 2002 that the loss of the pumping station as a necessary sacrifice in order to achieve the greater good of saving Battersea Power Station has therefore been proved to be false.

The pumping station is of great interest, in particular in terms of its industrial archaeology.   It is quite clear therefore that the pumping station should be incorporated within the current masterplan for the site. The Historic Building Record prepared by CgMs consulting on behalf of Parkview, the then developers of the whole Battersea Power Station site (Document JL/3184) show there is a “void” beneath the Pump station up to 20 feet deep. CgMs suggested that this need not be be further investigated and it was back filled, however research by members of the Battersea Power Station Community Group of drawings held at the London Metropolitan Archives suggest the giant 112 inch Cornish engine (or remnants of the smaller engines) may still be in this void.

If REO/Treasury no longer requires the building, then it should be transferred to a trust.   PPG 15 requires trust ownership be considered before an application for listed building consent to demolish can be given.

The Battersea Power Station Community Group will be very happy to take on ownership of the building if REO/Treasury no longer requires it.  We would be able to raise funds to repair the building, using the Heritage Lottery Fund and other sources.  There are any number of socially useful purposes to which the building could be put, such as a boating club or an annex for the Kew Bridge Steam Museum?

If you would like to object to the Battersea Power Station plans you have until January 31st 2010 click here for more details.