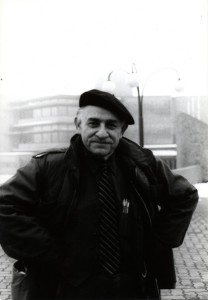 Bookchin’s story can and should be told to the world. And you can be a part of this project. Support BOOKCHIN ON BOOKCHIN during our Indiegogo campaign and help us reach our goal and beyond!

BOOKCHIN ON BOOKCHIN is an independent feature-length documentary about the life and times of American political thinker Murray Bookchin, who made history as the founder of the social ecology movement. Our aim is to make a film that deeply explores the influences and experiences that have helped shape one of the most unique and distinctive voices in modern political thinking. The documentary will explore the development of Murray’s politics through his personal experiences, drawing off hours and hours of filming. We have been granted unparalleled access to Bookchin, including exclusive interview footage at his home in Vermont and his final public appearance in Montreal. Murray was reticent to engage in anything that smacked of the personality cult but his biography covers key points in the development of radical politics and sets in context the “Social Ecology” of his later life. We are in the process of making the film, but need your help in order to complete it. Thanks for visiting our page and we hope you enjoy what you find!  ”Perhaps the most compelling real fact that radicals in our era have not adequately faced is the fact that capitalism today has become a society, not only an economy” Bookchin 1991.

Murray Bookchin (1921-2006) was a pioneer of the ecology movement, and was a significant social theorist on the Left throughout his life. He was an anti-capitalist and an advocate for the decentralization of society along ecological and democratic lines. He called for alternative energies and wrote prophetically about pesticides, cancer and obesity. His writing on anarchism, specially his 1971 book Post-Scarcity Anarchism, lifted and sustained the movement from the 19th century into the 21st century. His life paralleled major American and international events, such as the Great Depression, World War II, the Vietnam War and the counterculture movement. We’ll ask how a large part of the 20th century, with all that’s come and gone, has helped shape his thoughts and theories. In 2006 Bookchin died after a long and active life as a revolutionary, being deeply involved in the labor movement, in the civil rights movement, in urban activism, and in Green politics. In 1974 he co-founded the Institute for Social Ecology. In 1992 the british newspaper The Independent, referred to him as ”the foremost Green philosopher of the age.” It called his 1982 book The Ecology of Freedom one of the ”classic statements of contemporary anarchism.”  His books include Our Synthetic Environment, The Spanish Anarchists, Towards an  Ecological Society, The Ecology of Freedom and The Limits of the City.

The director of BOOKCHIN ON BOOKCHIN is Mark Saunders, an award-winning independent film-maker, media activist and writer. His expertise in the field spans over two decades. He is currently running Spectacle Productions, an independent London-based production company which he founded in 1990. Clients include Amnesty International, Channel 4, the Rowntree Foundation, the Howard League for Penal Reform and many others. Previous film credits include: The Truth Lies in Rostock, The Battle of Trafalgar, Exodus from Babylon and Despite the City. His films have been broadcast internationally and exhibited at galleries, including Tate Britain, the National Film Theatre, the Institute of Contemporary Art, Musee des Beaux-Arts,  the National Media Museum and the Photographers Gallery.

Why should you help us make this movie?
We think it’s important that Murray Bookchin is preserved on film; sharing his thoughts, telling us his stories and showing us a side of himself very few people have had the opportunity to see. You are supporting a truly independent documentary about a remarkable man who believed political movement at a local level was necessary, anticipating the global protests that have since swept our screens. This past year alone, the Arab Spring, the Occupy Movement, environmental and student protests worldwide have demanded change. In a climate of pervading political and social dissatisfaction, Murray’s thoughts and theories have as much resonance today as they did back then.  Murray Bookchin was a  theorist of the anti-globalisation movement before its time, an ecological visionary, an advocate for direct action and a polemicist. He believed in the unconventional, the non-traditional, hence us looking for a funding platform that allows us the independence and freedom to make a documentary faithful to ours and Murray’s vision. Indiegogo provided just this; it made it possible to reach out to Murray Bookchin followers all over the world. On the right you’ll see the pledge levels with corresponding rewards. You can donate to our documentary and in return receive some fantastic rewards. We have a project we believe in and now need your help to make it a reality!

How your contribution will help
We are an independent non-profit group and all funding and support will be used to cover production costs for our film. We’ve had no commissioning money and no access to conventional funding. Every dollar we raise will go towards:

* We have hours and hours of exclusive footage and the only way to finish this film (and give it that award-winning touch) is to hire an editor to work on it full time. This will include Color Correction and Sound Mixing.

* Archive material – we need to cover the huge costs of acquiring licensing rights to what we consider key historical moments, significant elements to his story.

* To organize and host local screenings and to submit the work to world-class festivals.

*  Our fundraising goal has been set at the minimum level at which we can make this documentary. We would like to raise a lot more than that because all the money will go to making the film that much better. Should we exceed our goal, rest assured that the money will go straight into the film. Please lend you support. Every extra penny helps!

Other ways you can help
Spread the word, tell your friends and colleagues, share our video on Facebook, blog about the project and Tweet. Anything you can do to help spread the word will be of tremendous service and is enourmously appreciated.  If you can’t spare any money, then share your thoughts. All feedback and comments are more than welcome. You can reach us at BookchinBiog@spectacle.co.uk. Feel free to email us with any questions or comments you have. We know how important it is to have all your questions answered, so just get in touch and ask away! We’ll answer all emails promptly.

Visit our Indiegogopage and support!