David Cameron’s decision to invite little old you and me to run the country at the big boys’ table at Battersea Power Station was no accident, because you see, he wants to FIRE UP the nation. Y’know, like the station. Because it’s stopped working. FIRE UP the power because the country is derelict and…ok he wants to REGENERATE the station, no wait, I got that wrong, regenerate the NATION, because England is like a dilapidated…oh I don’t know why I bother.

Anyway, if he was going to recklessly bounce loaded metaphors around the inside of the power station he should have been wearing a hard hat – that structure is dangerously unsafe according to REO. At least that’s what was told to Battersea Power Station Community Group, unless they were to have the required clout which presumably comes with a ‘no topple’ guarantee.

The key point of all this is that Cameron’s ability to bypass this regulation demonstrates that REO’s persistent claims that the chimneys must be pulled down due to their perceived danger is most definitely a falsehood, and it highlights the superficiality of their concerns over safety at the station which very clearly are being raised as an excuse for their desired re-development. Once the chimneys are down they will never be put back. You can read more about it here in Spectacle’s Battersea Power Station blog. 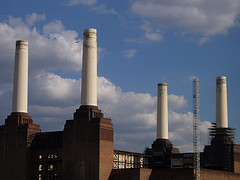