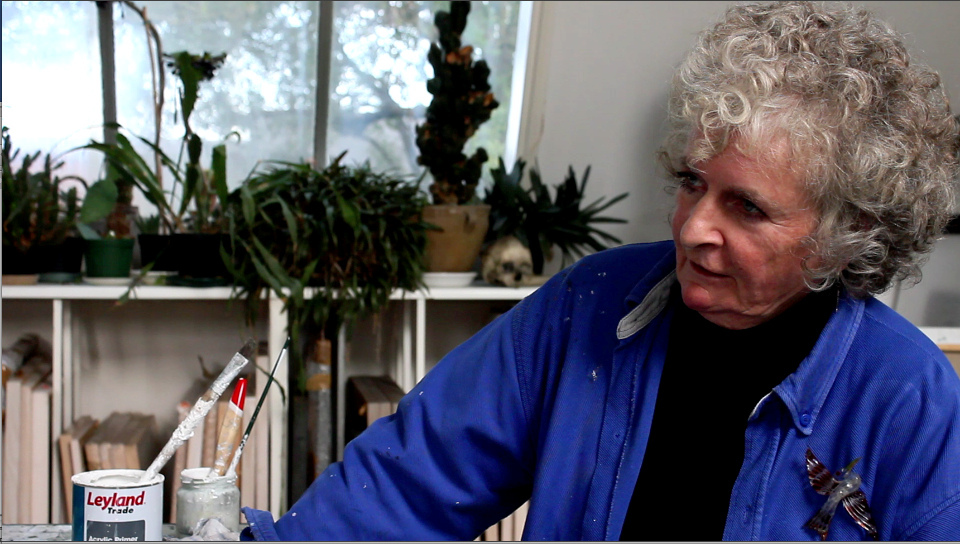 Painter, sculptor and Clapham resident, Maggi Hambling, told Spectacle that ‘Lambeth Council, rather like Jack the Ripper, seems to be ripping its way through the whole feel and importance of this area’ through its short-termist policy of selling off cooperative housing, such as that of Rectory Gardens, just round the corner from Maggi’s sunlit studio.

‘What I think is most extraordinary is that Lambeth calls itself the ‘Cooperative Council‘ when it has destroyed and is still destroying every cooperative around me. It’s terrible, to put it mildly’, she says. In an interview for Spectacle’s documentary about the breaking up of Rectory Gardens Housing Co-op, Maggi describes Lambeth’s ‘money-grabbing, short-sighted, and morally criminal’ behaviour towards Co-ops in the borough. In nearby Lillieshall Road, only two of 15 houses remain, while residents of Rectory Gardens are currently in the process of being evicted.

‘The creative community, as I have known it over all these years, has changed from an enormous mix of different people living together and caring about each other into this gentrified place where money, money, money, rather than any kind of feel for the community, rules. Every bit of creative spirit is being exterminated with a very heavy hand. Nothing but destruction is coming from above.’

Maggi moved to the area in the 1960s and remembers the wide variety of people who once made this their home, including artists and craftspeople. The systematic eradication of co-ops, she fears, is the product of a policy of greed that will ultimately destroy what makes this place special to live in.

‘Clapham and places around here will just become dormitories for people in the city who can afford the extortionate amounts of money they’re paying for their little bit of castle. This area is trying to turn itself into Mayfair. Something that the totally un-cooperative Council is probably very happy about to the detriment of healthy communities and anything that breathes any life.’

‘Rectory Gardens is the last bastion of the cooperatives and is hanging on by its teeth. Whatever anyone can do to save it must be done now. I would ask the Council to look at their own greed and lack of foresight and vision. Otherwise, this sort of Jack the Ripper policy is going to amount to a London that is extremely boring, to say the least.’

Despite anger, Maggi optimistically concludes that ‘it is possible to win these battles. The so-called Cooperative Council should be emphatically made to see how blind they are being and how cruel.’

But, she wonders, as many might, ‘why does everything have to be a battle?’

What you can do:

Write to the Council to support the ‘Super Co-op’ solution: http://www.lambethunitedhousingco-op.org.uk/?page_id=157