Despite snow, rain, short daylight hours, exams and Saturday job commitments a group of local young people connected to The Voice Youth Project (formerly Awaaz Project) participated in a series of media workshops in December and January. Our chosen theme was not the difference between the London and Delhi water fronts but the similarities.

Using five cameras and five laptops we started to explore our theme locally to Watermans as it was not practical to visit the Olympic site at Stratford as we had originally envisaged. Happily we discovered, right on Watermans doorstep, a microcosm of all the issues. Through conducting interviews the young people discovered how precarious the livelihoods and the homes of the poorest and most marginal can be . How, for some, mega sports events such as the Olympics and Commonwealth Games accelerate and leverage this displacement. 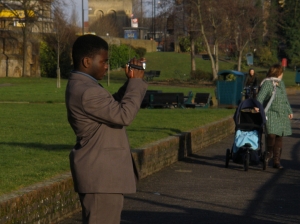 The waters edge, immediately in front of the gallery, was occupied by unlicensed houseboats. A little further along, in front of new built flats are more established licensed houseboats who ironically are under threat of being displaced by the developers of luxury apartments. On land between these apartments and Kew Bridge is the Eco Village. The 40 strong group, slogan "The Land is Yours", is occupying the site, empty for more than 20 years and part of St George the developer's land bank, to demonstrate a more sustainable lifestyle and to provide the local community with access to the river front space.

This eco-village occupation is inspired by campaigns like The Land is Ours which campaigns peacefully for access to the land, its resources, and the decision-making processes affecting them, for everyone, irrespective of race, gender or age.