With work on redeveloping the famous London landmark due to start next year, what does the future hold for that part of the south bank of the Thames? 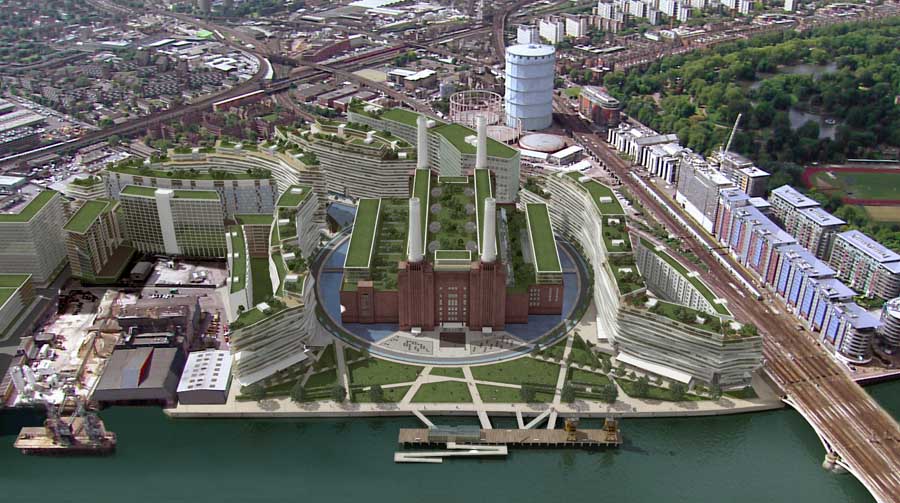 It was decided back in June that the decaying Battersea power station site would be sold to a consortium of Malaysian developers following the financial collapse of the previous owners. There had been talk of Chelsea FC relocating there, but that always an unlikely result. Two months earlier, Rafael Vinoly had presented his masterplan vision for this landmark location in the video below. It’s worth a careful watch.

Encouraged? Excited? Impressed? Community campaigners seem simply depressed, especially about those four famous chimneys. In his video Vinoly spoke of the “original stacks,” but it has lately emerged that the plan is to demolish and replace them with replicas.

Critics claim there’s no need to knock them down and express doubts that the copies will ever rise – the suspicion is that the developers would sooner level the whole building, which would increase its potential for profits. They’re unhappy too about the amount of protection provided by English Heritage and sceptical that the proposed riverside walk will be all its cracked up to be.
But this is much more than a heritage row. The power station site is just part of the far wider redevelopment of Nine Elms, a huge enterprise covering 480 acres stretching from Chelsea Bridge to the Albert Embankment, which will also include the new US embassy, luxurious waterfront accommodation, a linear park, Europe’s largest residential towers and an extension of the northern line.

If the whole lot come to fruition the boast is that 25,000 new, permanent jobs will be created along with 16,000 new homes of which an anticipated 3-4,000 will meet the newly slackened definition of “affordable” – a larger percentage than the Earls Court project and some other schemes in the capital would like to get away with, but still not very large. You might be able to find work in the new Nine Elms, but don’t expect to be able to live there. That’s the way London is going.
Full article can be found here.