In June, Spectacle’s Mark Saunders was among 50 international scholars and experts who visited the proposed site of the Belgrade on the Water project, a development on the Sava riverbank in the downtown area of Serbia’s capital. The group were attending the International Network for Urban Research and Action (INURA) 2014 conference in the city.

Belgrade on the Water is a vast real estate project intended to create a new business hub in Belgrade. It has been designed and will be built by Eagle Hills, a construction company based in the UAE which shares its chairman, Mohamed Alabbar, with Emaar Properties – the company behind Dubai’s Burj Khalifa, the tallest building in the world. Eagle Hills suggest that the development, which will cover 1.85 million square metres, could be completed within five to seven years. It is expected to cost just under three billion euros. 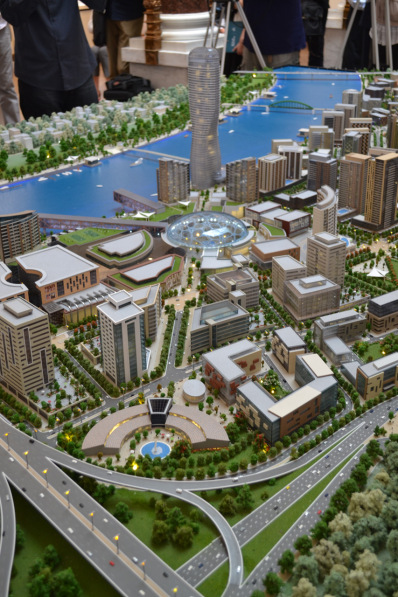 A model of Eagle Hills’ proposed Belgrade on the Water development

Despite having the full support of Prime Minister Aleksandar Vučić, who is thought to have let Eagle Hills have the land free, the project has attracted a number of criticisms. The INURA group – who between them have expertise on waterfront developments in London, Amsterdam, Hamburg, Barcelona, Boston, New York, Toronto, Vancouver, Hong Kong, Sydney and Melbourne – have since published an open letter on the subject. They write:

“We are very impressed by the unique qualities of Belgrade, especially the fine-grained and mixed urban spaces that this city provides. The connection of the downtown and the water could be enriched by a careful development of the area between the city centre and the Sava River. We understand that the Belgrade on the Water project is an initiative to make this connection, and we applaud the impulse. We have seen and studied the plans, however, and want to communicate some serious concerns about the current proposal.”

The letter goes on to outline their concerns:

1. The economic risks are high…

INURA point out that megaprojects are always vulnerable to market fluctuations, but the letter is particularly critical of the entire project being given to a single investor. It points out that if the company becomes financially unviable, Belgrade will have an unfinished development on a prime site. “At the very least,” INURA write, “ensuring a diversity of developers can mitigate these possibilities.”
The letter goes on to express doubt that the project will be completed at all. “The proposal envisages 200 new buildings, but the economic context is such that only what is referred to as ‘the first A phase’ of the project has some probability to be constructed: two apartment buildings, two hotels, a high-rise tower and the ‘largest shopping mall in the Balkans’.” INURA believe that the there is a significant risk of these buildings standing “unsold and isolated on a cleared site, cordoned off from the public until land values and purchaser interests increase”.

…and gains to Belgrade are low

The letter argues that, “promises of economic gain through jobs in design, construction, maintenance and operations need guarantees of use of local resources and labour with good wages and conditions.”
INURA are sceptical that the development will be particularly beneficial to local workers, pointing out that the buildings proposed for the waterfront are such that most jobs generated will be short term, low paid construction and service jobs. They argue that instead the content of the development could be far more diverse in order to respond to the real needs of the city and citizens.

As it stands, INURA don’t believe that the proposal is in the best interests of local people. INURA states: “The land along the Sava has great potential value. Its transfer at low or no cost into long-term private leasehold will deliver little benefit to the citizens of Belgrade. In addition, the commitment of EUR 200 million of public funds to the clearing of the Sava Amphitheatre is likely the beginning of high expenditure from the state which characterizes such projects. It seems that there are many better ways of using these means and the area, in the way which would be more appropriate to economical, societal and ecological context.”

2. The plans are clichéd and exclusionary

INURA criticise the current design for revealing “a generic landscape of soulless and disconnected office, residential and commercial buildings. This high-end ‘mixed use’ formula contains no social, economic or cultural mix. It is a clichéd, corporate model that neglects local needs in terms of housing or work. It provides a very limited range of opportunities for production and consumption.”
The letter argues that “Belgrade’s greatest attractions are intricately connected to its people and culture. The city’s people populate the streets and create the spaces that make it so distinctive and full of potentials. Their exclusion from the planning and design processes for Belgrade’s waterfront development is not only inequitable – and therefore dangerous – but missing a profound opportunity to engage and utilise the city’s most vital assets.”

3. The environmental consequences have not been taken into account

INURA describe the Sava’s ecological balance as delicate, and say this has been neglected in the current proposal. The letter points out that, “In a period of serious climate change in an already flood-prone city it makes little sense to build on riverbanks without careful consideration of adaptability and allowance for water expansion. Waterfront developments in the past have destroyed local ecologies, displaced resident populations, and made public open space inaccessible.”

INURA argue that technologies for climate change adaptation and handling waterfront ecologies are developing rapidly. “Here is an opportunity for Belgrade to display a new and exciting approach to its river bank.”

INURA point out that things could be done in a way that is much more beneficial to the community: “International practice and standards for making waterfronts available for better and wider uses are also improving rapidly…
Local authorities are now employing sophisticated urban design processes, including fine subdivisions of land for lease or sale to a range of investors from larger companies to small entrepreneurs and community groups. These principles encourage innovative local and vernacular architectural styles in large project designs, and ensure diversity in built form and use. This in turn allows local opportunities to flourish in the context of a more globalised environment.”

Further to this, INURA advocate participatory processes in planning, which they believe guarantee better outcomes. “In engaging local communities and their local knowledge, project outcomes are not only very often substantially improved, but they are locally owned, and receive a particular legitimacy from this process. Such an approach would make the development of the Belgrade waterfront more viable.”

4. Here is an opportunity for a project that really does capture the global imagination

Economically, too, INURA believe the Belgrade on the Water project does not do justice to the potential of the site: “If the nation wants to invite the world into its social, cultural and environmental heart, it needs to do more than plan for a run-of-the-mill development formula that lacks any character unique to Belgrade.”

“Rather than providing a standard blueprint with an unclear business plan (the obligations of the state being much greater at this point than the obligations of the investor), this project should be built step by step, closely monitored by the highest standards of local planning regulations and transparency. It must have attention to local economics, and to the design and use of this central part of Belgrade. It must involve its people, recognise the need for ecological restoration and sustainability, and not fall prey to the expectations of a corporate urbanism that is rejected by urban professionals and citizens alike around the world.

If Belgrade on the Water is to be a sustainable success, it must project the city’s needs and desires onto the global stage, rather than making one of Belgrade’s prime pieces of real estate the extension of a nameless global enterprise.”

You can read the letter in full here.