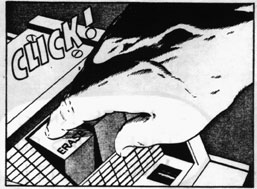 A helter skelter ride from the dawn of pre-history to the present day. TV will never be the same again. A beginners guide to situationism from the 'Spectacular Times' creator the late Larry Law.

An exellent 40 minute video on the state and life in general, with the same incisive and easily understandable analysis we all know and love from the 'Spectacular Times' creator the late Larry Law.

Are You In A Bad State
Larry Law
Larry Law, writer, publisher and anarchist, died in the early hours of Friday 22nd July 1988. He had gone to the doctor's on Monday with a lump in his chest and was taken straight into hospital. On Thursday he underwent an exploratory operation and died in his sleep a few hours later. He had cancer of the lower bowel.

Larry published the Spectacular Times series of pamphlets. The contents were an assembly of cleverly juxtaposed newspaper clippings (the more bizarre the better), quotations, and text written by Larry. As the title of the series suggests, Larry was writing in the situationist tradition, an attempt to bring revolutionary ideas up to date with changes in society. But were as Debord and Vaneigem read as if their writings were still in the original French and hadn't been translated into English, Larry wrote simply and clearly. Even the format of the Spectacular Times Pocketbooks, the small size and the way the clippings and quotations broke up the text, helped to make the ideas acceptable. As did Larry's strong sense of humour.

Production of the pocketbooks (and other Spectacular Times titles) was by Liz Swain, Larry's wife.

Liz says that she only saw Larry do graffiti once (he was too much of a perfectionist to rush something off in a couple of minutes). At the Abieezer Coppe Free Festival in Reading, on a wall inside the building that had been squatted he took days to draw an enormous sunrise and across it he wrote "Paradise Now. If Not You Then Who. If Not Here Then Where? If Not Now Then When?"

From Obituary in Freedom by Mo

Copies of Spectacular Times are still available from:

Are You In A Bad State was finished just before Larry died. He never saw it screened to an audience. It was premiered at Televisionaries (see events). Two decades later it still holds up as a master piece. What would Larry have made of the last twenty years? We can only guess and take up from where he left off.

Click on the thumbnail images below to enlarge these still images from Are you in a Bad State?