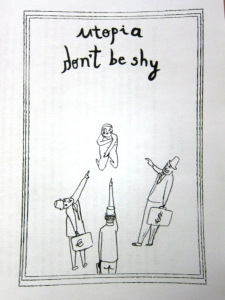 It’s often been said that this is not only a socio-economic crisis of systemic proportions, but also a crisis of the imagination. And how could this be otherwise? Decades of being told There Is No Alternative, that liberal capitalism is the only rational way of organizing society, has atrophied our ability to imagine social forms of life that defy the bottom line. Yet positive affirmations of another world do exist here and there, in neighbourhood assemblies, community organizations, art collectives and collective practices, the Occupy camps… It is only difficult to tell what exactly the notion of progress is that ties these disparate small-is-beautiful alternatives together: What type of utopias can we imagine today?

With his theories of radical libertarianism Murray Bookchin, among many others, has offered up a vision of utopia incorporating a strong emphasis on cooperation, equality, mutual aid, feminism, liberation, and ecological wisdom. His work has influenced the the writing of literary utopianists like Ursula le Guin (The Dispossessed), who along with others, most notably Marge Piercy (Woman on the Edge of Time), and Sally Miller Gaerhart (Wanderground) have dared to imagine specific versions of utopianism.

Banned from “mature” politics, the task of representing utopia has generally been women’s work. As feminists distanced themselves from the ’68 macho revolutionary culture (be it party politics or guerilla tactics), they turned to the politics of everyday life. Whether in literature or in intentional communities and affinity groups, women risked the cardinal sin of politics – being unrealistic and impractical, by building utopias from the ground up around activities they were told did not have a proper place in politics: eating, cleaning, housing, care and education. If the material foundation of capitalist domination was to be found in the home, utopia would also have to start at home, from the basic activities that reproduce the body in all its difference and social relationality.

Why not support our Bookchin on Bookchin film?