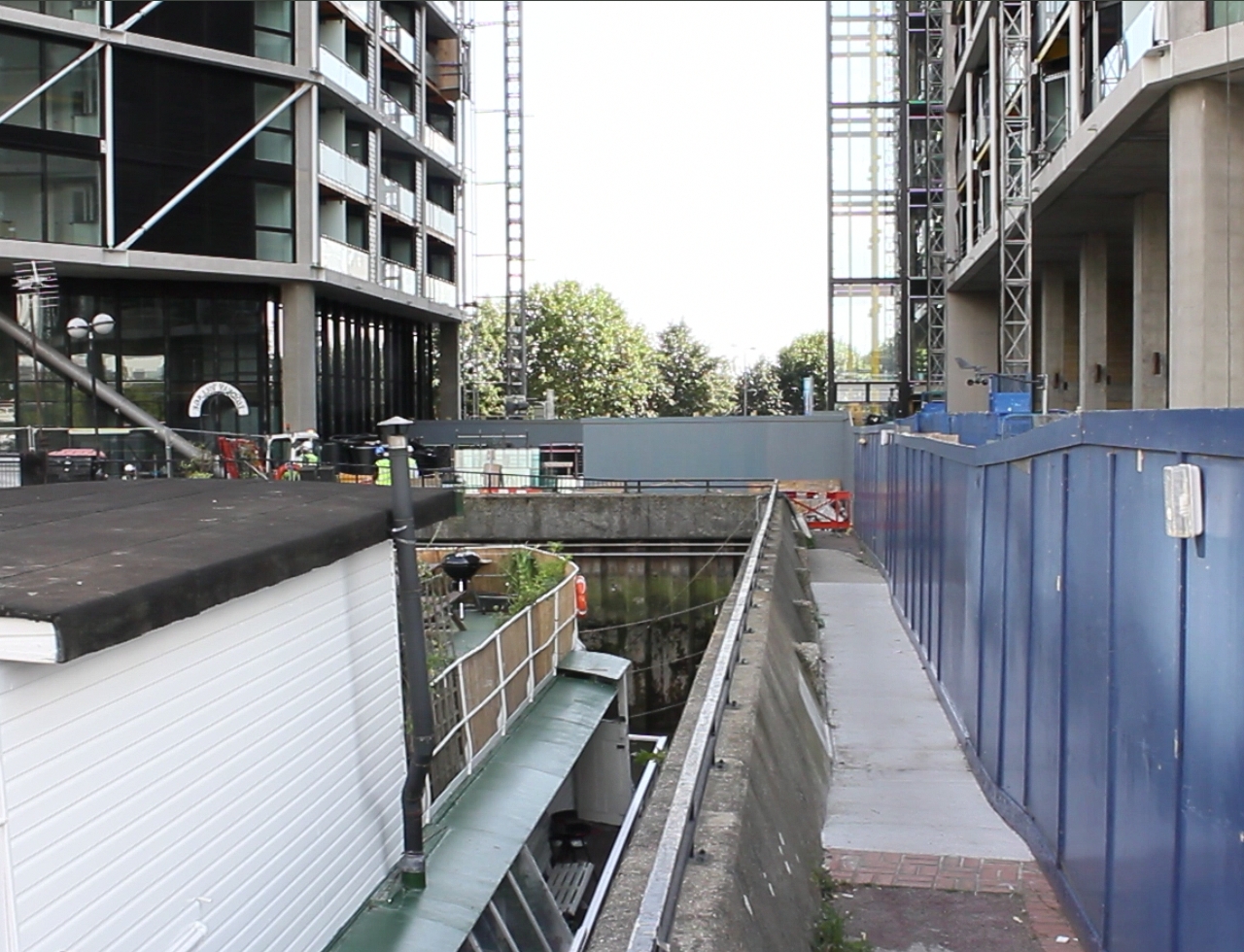 `We recently interviewed David Waterhouse, resident and co-founder of Tideway Village. Tideway is a small community of houseboats (which includes the award-winning Battersea Barge venue) moored in and around a disused colliers dock that once served Battersea Power Station. David established Tideway in 2001 with Rainer Cole, who applied for a mooring in the previously empty dock at the same time by sheer coincidence.

David’s boats and two others are moored at the end of Nine Elms Lane, which runs through an industrial area that is now being turned into real estate by the Berkeley Group as part of the vast Nine Elms development. Since 2008, when it first came to light that the area would become a residential development, Tideway Village has been under threat.

Although the Tideway boats all have 15 year mooring rights – renewable with the Port of London Authority (PLA) –  they need permission to access the boats too, from whoever owns the land which borders the dock. Tideway is ostensibly bordered by the Thames Path – public land, controlled by the council – however a three foot wall between the path and the river is owned by the Berkeley Group.

Initially, the developers tried to deny residents access to their homes, in order to remove the boats. They intended to put a floating garden in their place, which David said would have killed all the aquatic life underneath. Tideway residents were not consulted or even notified about this. When they found out they launched a campaign to save their homes, including holding an open day and protesting outside a Wandsworth Council and Berkeley Group meeting. An e-petition gained 2000 signatures, including many people who had performed at or attended the Battersea Barge venue. If this hadn’t worked, David would have tried to invoke residents’ right to use the historic slipway at Nine Elms Pier which the boats are currently moored beside – this  has never been officially closed up.

Thankfully it never got to this, by campaigning and by challenging the common misconception of houseboat communities as people who just turn up (Tideway residents pay council tax and have a license to be there), David was able to persuade the Berkeley group that the community is serious and responsible and negotiate continued access to the boats. As a result, he believes they will be able to stay – he said he is currently tentatively optimistic about the future.

Having convinced the Berkeley Group that his community can fit into their vision of the waterfront, David now has a ‘relationship of a sort’ and a ‘good understanding’ with the developers, but before establishing this he suffered a lot of stress. Tragically, Rainer committed suicide in 2012, David believes the uncertainty of their situation was a factor in this.

David also acknowledges that the character of Tideway Village will change dramatically now. At first it was ‘very much a backwater’, an extraordinary, forgotten area, given how central it is. Having the space to themselves allowed the Tideway community to throw parties and hold open days, which won’t be possible anymore with blocks of flats overhanging the boats. In addition to this, David currently lives with near constant construction noise and access to the boats is restricted by the building work, which has closed part of the Thames Path .

Although David is happy that Tideway has a future, he lamented the fact that the Port of London Authority has never positively incorporated houseboat owners and moorings into the way it coordinates the river. He explained that it is extremely difficult to get moorings in London and believes that other places in Europe have all done more with their waterfronts in this respect. For this reason, he described the PLA as having “presided over the death of the Thames”. It has become a feature of the river, he said, that boats are frequently removed.

However David believes houseboats can be successfully incorporated into communities and is excited that Tideway now has the opportunity to prove this. David thinks Tideway could become to the Thames what Little Venice is to Regents Canal – it is a very special space, he explained, central London’s last functioning tidal dock in a landscape that was once full of tidal docks.

Tideway Village will be a stop, and David a speaker, on a walking tour organised by the Battersea Power Station Community Group and sponsored by the World Monument Fund on the 27th September.

David has also agreed to participate in one of our 4 day training courses, so Tideway Village may serve as a ‘real life project’ for future Spectacle trainees.