Video can transform your website, it is accessible, engaging and often more convincing than text. Once you have mastered digital video production for the web you can make pitch videos, explanatory videos and promotional videos to boost your business and brand.

Training existing staff to produce high quality digital video content for your website is far more cost effective than hiring an external film crew and can produce the same excellent returns. In addition to being more affordable, we believe that existing staff have the potential to advertise, demonstrate and spread the word about products and services that they thoroughly understand more effectively than outsiders.

Spectacle offers a three day course specifically designed to meet the needs of small businesses, start ups, social enterprises and charities, on set dates at our premises in London, or at a time convenient to you in your office or ours if you are booking for a group.

If you need additional or different training, we can design and run a training course specifically for you.

Seven reasons why you should make videos for your website

If you would like more information on future training opportunities at Spectacle sign up for the Training Newsletter – tick the box if you would also like Spectacle’s general newsletter. 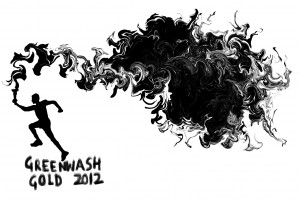 On Monday 16th of April, a coalition of environmental and human rights groups are unveiling a new online campaign, Greenwash Gold 2012, focusing on the ‘worst’ London Olympic sponsors. this is sure to ramp up the pressure on LOCOG after the fiasco surrounding Dow Chemical’s sponsorship of the London Games as further groups look set to unite in opposition to various London Games sponsors.

Three controversial Olympic sponsors, Dow Chemicals, BP and Rio Tinto are the targets of the new online campaign. Each has been made the subject of a short animated film (by various award-winning animators) and viewers will be encouraged to visit the ‘GreenwashGold’ website where they will be able to vote for the worst corporate sponsor.

During the Games, in July, the organisers will award medals to these companies based on the results of the public voting.
Members of communities impacted by the Olympic sponsors, from all over the world, have come together for the launch event on the 16th to criticise the companies, including:

A survivor of the Bhopal disaster who witnessed first-hand the devastation caused by the gas leak and campaigns tirelessly to highlight Dow Chemical’s liability towards the ongoing chemical contamination.
A representative from the Gulf Coast where communities are still dealing with the environmental devastation of BP’s catastrophic oil spill.
An organiser with indigenous communities in Canada fighting BP’s controversial tar sands operations.
A mother from Utah fighting against the life-threatening air pollution levels caused by one of the mines from which Rio Tinto is providing the metal for the Olympic metals.
A community representative from Mongolia where another Rio Tinto mine proving medals metal is accused of exploiting scarce water resources in a desert region.
The launch on the 16th will be chaired by Meredith Alexander, the ex Olympics ‘ethics tsar’ who resigned her role on, the Commission for a Sustainable London 2012, over controversies surrounding Olympic sponsorship.

Colin Toogood, Bhopal Medical Appeal Media Spokesman said: “The Dow Chemical Company are the owners of the Union Carbide Corporation wanted, in India, on the criminal charge of culpable homicide for their role in their Bhopal Disaster. The Bhopal disaster site has never been cleaned up and highly toxic chemicals are now found in the drinking water of over 30,000 poor people. If we can clean up the London Olympic site in readiness for the games, why can’t Dow take responsibility for cleaning up Bhopal.”

Richard Solly, coordinator of the London Mining Network said: “Some of the most disreputable companies in the world are sponsoring the Olympics. Rio Tinto, Dow and BP all have appalling environmental and human rights records, and they are being allowed to greenwash their tarnished reputations by association with the 2012 games. Greenwash Gold 2012 is providing people with an opportunity to name and shame the worst corporate sponsor of London Olympics.”

Jess Worth, from the UK Tar Sands Network, said: “BP has bought itself the prestigious title of London 2012 ‘Sustainability Partner’. But this is dangerous greenwash. BP is one of the least sustainable companies on earth, responsible for the Deepwater Horizon disaster and the extraction of highly-polluting tar sands. Its entire business is geared towards keeping the world addicted to fossil fuels and driving us towards uncontrollable climate change. And the Olympics are helping BP get away with it!”

Cherise Udell, the founder of Utah Moms for Clean Air, said: “I was delighted to learn that the 2012 Olympic committee was aiming for the greenest Olympics ever. Then I heard that Rio Tinto metal from our controversial Utah mine would be used to make the medals. In Utah, Rio Tinto are the number one emitter of toxins known to cause harm to human health. Every year, between 1000 and 2000 Utahns die prematurely due to chronic air pollution and Rio Tinto’s Bingham mine is responsible for about 30% of this.”

Farah Edwards-Khan was born and raised in Bhopal and was ten years old at the time of the disaster. Farah was lucky enough to be in a part of the city that was not too badly hit by the gas, during the night of the main disaster, but witnessed the unfolding tragedy first-hand the following morning as bodies lined the streets of Bhopal

Colin Toogood has worked for the BMA for three and a half years after a change of life decision for this erstwhile DJ. Colin decided he needed something more worthwhile to do with his time and feels very lucky to have found such a worthwhile cause to be working for.

Cherise Udell, the founder of Utah Moms for Clean Air, is a mother of two, and a resident of Salt Lake City. Cherise has a B.A. in Cultural Anthropology from U.C. Berkeley and is nearly finished with her M.S. in Environmental Health and Social Ecology at Yale University.

Derrick Evans is a sixth-generation native of Turkey Creek, a Mississippi Gulf Coast community settled by freed slaves in 1866. Derrick founded Turkey Creek Community Initiatives to promote sustainable local development that is both environmentally and culturally sensitive. Since Hurricane Katrina and the devastating BP Deepwater Horizon spill he has been a tireless organizer and advocate for the needs and rights of coastal communities, and is an advisor to the Gulf Coast Fund.

Clayton Thomas-Muller, of the Mathias Colomb Cree Nation also known as Pukatawagan in Northern Manitoba, Canada, is an activist for Indigenous rights and environmental justice. Clayton is the tar sands campaign organizer for the Indigenous Environmental Network and works with grassroots indigenous communities to defend against the sprawling infrastructure that includes pipelines, refineries and extraction associated with the tar sands, the largest and most destructive industrial development in the history of mankind. 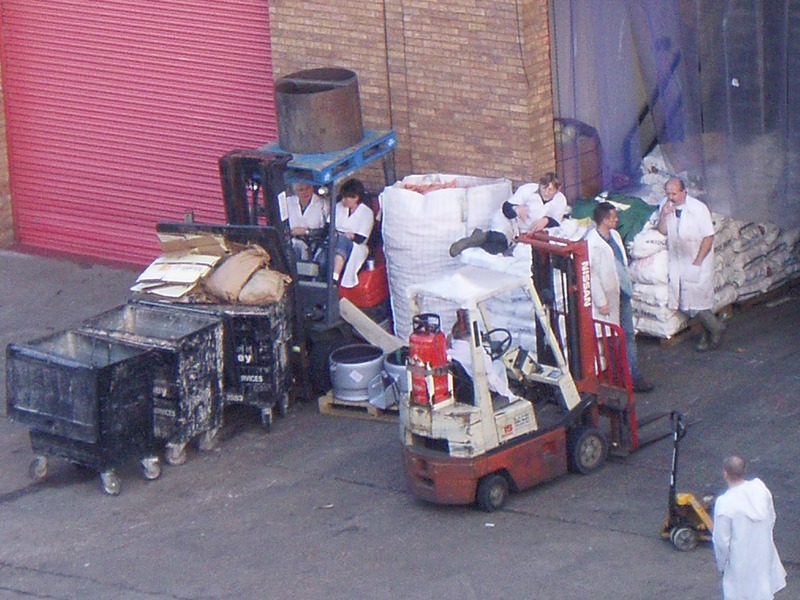 One of the local businesses displaced by the Olympics

A group of 40 businesses located near the Olympic Park are filing lawsuits against the London Organising Committee of the Olympic Games (LOCOG), on the grounds that the companies do not receive sufficient compensation when their businesses are devastated by the road closures or other relevant measures.

These companies fall outside the LOCOG’s compulsory purchase zone, ranging from transport business, cafes, garages to retailers, have committed a small amount of money to take legal action against LOCOG over the alleged lack of compensation plan and a perceived failure to provide relocation packages for the worst affected. Lawyers from John Halford and Paul Ridge will advise the group for a moot action against LOCOG.

LOCOG claimed Olympics has the capacity to transform one of the most underdeveloped areas of the country for generations to come. But businesses warned that having fewer customers is the only Olympic legacy they have.

Michael Spinks, manager of Essex Flour & Grain, complained the road closures would disrupt the revenue. He told the BBC: “Locog behaves like the playground bully. They don’t seem to care about the welfare of their neighbours. We are expected to fall in line and if we survive we survive, and if we don’t it is all for the greater good of the Olympics.”

Graham Phelps, manager of Phelps Transport said: “In rush hour we won’t be able to work at all. Where our drivers might usually leave at midday to get to a job in Birmingham they’re going to have to leave at 5am during the Olympics just to get there on time. We could lose between 50 and 60 per cent of our turnover.”

Traffic disruption dissuades customers purchasing from stores, as the manager of Pennywise Furniture wholesalers Kevin Farley voiced his concerns: “If there’s going to be police checkpoints, that will create a massive bottle-neck. I can see half of our customers staying away.”

The government’s plan to ‘regenerate’ the area will result in relocation, such moves may also pull away some loyal customers. From a community blog “Newham 2012“, a local pub owner faces an uncertain future due to radical changes within the community, he told the blogger that it was packed two years ago, but now there were only 3 other people in the pub.

The Federation of Small Businesses (FSB) said a study of nearly 1,700 small firms indicated that only 7% of them believe the 2012 Olympics will be of benefit to them. And 25% said they thought the events would have a negative impact.

In fact, LOCOG did expect some economic damages during the Olympics, the committee issued “Preparing your business for the Games” report, alerting entrepreneurs and businessmen prepare in advance to line up strategies minimizing potential loss. In the report, it has listed potential impacts on business and some coping strategies are also included. The impacts include:

In this case, the bill for hosting London Olympics keeps rising, the economic impact is now going beyond what the Prime Minister David Cameron defended earlier for £9.3 billion. At this point, we can say the perceived “Olympics Effect” has almost vanished (the term refers to the fact that the West End predicts more than £17million being spent in major shopping districts or other economic benefits driven by tourism), some companies forecast the Olympics will flush in large amounts of income, pushing cafes and shops to rebrand themselves as “Olympic” in East London.