The London Olympics has already suffered severe setbacks from activists who are threatening to disrupt the smooth functionaing of the mega event. Lord Sebastian Coe, Chairman of the London Olympics Organising Committee has repeatedly turned down suggestions that he should get rid of some of the corporate sponsors. London which will be the first city to host the Olympic thrice is facing issues over sponsorship deals, transportation within the city, land grabbing and ceremonies expenditure.

The Olympics is an event of freedom, spirit, youth and energy; so why all these protests against an event of such big stature. The issue started when the organisers headed by Seb Coe agreed to massive sponsorship deals with corporates who have been responsible for heinous crimes in its history. BP, the most popular corporate culprit in the United States after its massive oil spills in the Gulf of Mexico has threatened more then 400 species and cost thousands of jobs. BP constantly delayed the cleaning of the oil spill and had to pay massive fines and compensations. American financial service giants VISA are engulfed in a controversy of their own. Any Olympic electronic financial transaction has to take place through a VISA debit or credit card. Many have raised their concern over the monopoly created by the organisers and have called for the boycott of the services offered by Visa.

The controversies that probably have managed to create a big dent on the mega event are the sponsorship deals with Dow Chemicals and ATOS. I have mentioned in my previous blog about the inhuman behavior of Union Carbide officials which is now owned by Dow Chemicals towards the people of Bhopal after a gas leak from a tank resulting in 3,000 lives in just one night. ATOS which is the private biggest health care service after the publicly owned NHS is under the limelight for its atrocious treatment of the disabled in the United Kingdom. Not many doubts were raised when athletes and activists have called for the Olympics to distance itself from ATOS or else they will try their best to boycott the Paralympic games. A similar threat has been given by some leading politicians and athletes from India to boycott the main event. Perhaps the biggest surprise to me was the deal with GE(General Electric). GE is one of the leading producers of nuclear energy in the world and not just in America, as it has helped set up nuclear capabilities in many other countries.

It is a farce that corporates who have performed with dubious moral ethics have been allowed to sponsor an event that symbolises unity. Spread the word against corporate greed. 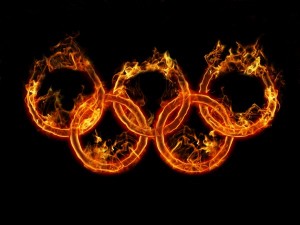