The new owners want to remove the listed cranes in front of the Power Station in order to use the jetty for the removal of spoil from tunnelling the Northern Line Extension ( NLE ). While it might be necessary to dismantle the cranes in order to restore there is no need to tie the timetable to the NLE works. The NLE will take years to complete even if it happens. Like the Euston Arch there is a real danger once removed they will never be put back. There is half a mile of river front where a more suitable purpose built jetty could be situated. It looks like yet another ploy to slowly clear the site of any historic or heritage obstacles to maximising profits- see demolition by stealth. 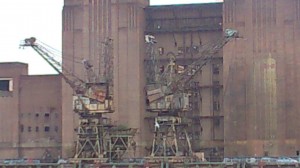 The jetty facilities used two cranes to offload coal, with the capacity of unloading two ships at one time, at a rate of 480 tonnes an hour. Coal was also delivered by rail to the east of the station using the Brighton Main Line which passes near the site. Coal was usually delivered to the jetty, rather than by rail. A conveyor belt system was then used to take coal to the coal storage area or directly to the station’s boiler rooms. The conveyor belt system consisted of a series of bridges connected by towers. The coal storage area was a large concrete box capable of holding 75,000 tonnes of coal. This had an overhead gantry with a conveyor belt attached to the conveyor belt system, for taking coal from the coal store to the boiler rooms 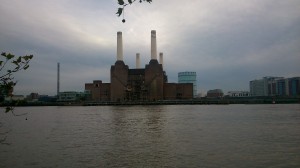 Now, the cranes will be facing demolishing. Even though they’re part of the listed Battersea Power Station and mentioned in the listing description:

”Subsidiary features: To the N on a jetty parallel to the river wall there are two cranes which were used to unload coal from collier boats. While of lesser significance, they were integral parts of the original complex and are now rare riverside features.”

The cranes complement the Battersea Power Station and help to explain its purpose and function. Other industrial archeology has already been lost, notably the travelling coal conveyor (dismantled by Parkview in 1995) and the raking conveyors into the building.

They should receive extra protection given these other losses.