In this extract of an interview, John ‘Bosco’ Jones recounts what it was like to be living in East London in the 1930’s when there was an active fascist movement. Bosco was later a member of the anti-fascist International Brigade ( see  Bosco’s interview on International Brigade ). He went to great lengths to help the people of Spain fight against the nationalists during the Spanish civil war. However, when he was living in East London during the early 1930’s the fascist movement was growing stronger and stronger thanks to the British Union of Fascists (BUF), with Oswald Mosley in charge. Mosley was inspired by the likes of Hitler and Mussolini and when he first started campaigning he had the support of the Daily Mail and The Mirror newspapers. This support waned when riots started breaking out at fascist meetings, most famously the Rally of Olympia, which meant their party could not take part in the 1935 general election.

Anti-fascist groups were made up of many different types of people such as communists, Jews, socialists and the unemployed, these groups tended to congregate in areas of the East End of London, such as Shoreditch. Bosco himself took part in anti-fascist meetings and rallies, which were often interrupted by the BUF and fights between the two groups were common, particularly as the BUF were anti-semitic and anti-communist. After the end of the second world war in 1945 many people who were coming out of the army found they were still fighting fascism.

In the 1980’s, when Bosco’s interview took place, although the amount of active fascists had gone down he still expressed concern over Thatcher’s government banning protesting and opposing the trade unions. Bosco states this time as being “as dangerous to me now as it ever was in ’36.”

Bosco left England in ’36 and made his way to Paris where the International Brigade headquarters were. He then had a difficult journey to Spain as France had closed it’s borders to them, so they had to cross the Pyrenees mountains to get there. Many of the Brits who went to Spain were already fighting against the growing fascism movement in the UK. When Bosco and his friends heard about the treatment of the Second Spanish Republic by the government they immediately started collecting donations of food and money for them before going out to fight alongside them.

When Bosco and his fellow soldiers got to Spain they travelled in lorries to their first location and after that spent many months at a time in trenches. They fought in many battles including the famous battle of Jarama where many troops lost their lives, including many of Bosco’s friends. Even though Franco’s government succeeded in taking control over Spain the work of the International Brigade is still appreciated to this day and Bosco has no regrets in fighting against fascism.

Watch the full Bosco on the International Brigade interview here

Scottish veterans at the unveiling of the international brigade memorial statue in 1985:

Spectacle was present in 1985 when the International Brigade memorial statue was erected and Scottish veterans gave their views about the war is the video shown above.  Thirty one years later, the 2nd of July marked the 80th anniversary of the start of the Spanish civil war. People gathered at the memorial at South Bank to pay their respects to the international brigade, 2100 of which were British, who fought against the nationalists during the civil war from 1936-39. The Nationalists were controlled by Franco’s government, who were fascists, and they had the support of Germany and Italy. The International Brigade was on the side of the second spanish republic and they were made up of volunteers from over 50 nations, there was an estimated 35, 000 of them. The International Brigade was made up of many different people such as communists, socialists, anarchists, jews, but they all had one thing in common and that is that they were anti-fascist. Their goal was to stop a fascist dictatorship from happening in Spain as it could have easily spread to other european countries that weren’t already controlled by fascists, such as France. Although the nationalists ultimately won and Franco continued to rule for a further 36 years it is clear that the work of the International Brigade is still valued to this day.

During the memorial held at Jubilee Gardens wreaths were laid for the 526 british volunteers who lost their lives to the cause and there was a minutes silence. Those present at the memorial included representatives from the spanish embassy, trade union veterans and the president of the madrid Association of Friends of the International Brigade. There was also performances from various artists and actors including songs from the upcoming play about the international brigade.

In the turbulent times we live in now is it possible we will need another International Brigade in the future and what form would it take?

Photos from the 80th anniversary: 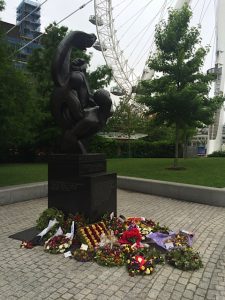 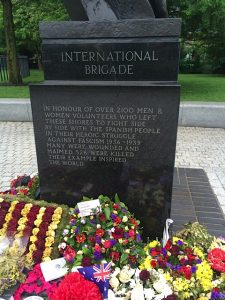 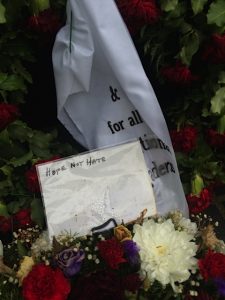 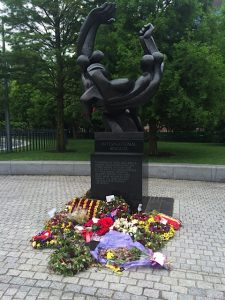 Watch our interview with John ‘Bosco’ Jones about being a member of the International Brigade.