DMAU’s  research project on Participatory Documentary features a video report that introduces one of Spectacle’s participatory projects APaNGO. The video explains the projects purpose – developing a strong community based network that promotes urban participation in planning through social media.

“The central aim of Spectacle’s video workshops is to train residents to film and edit video footage and through this capture and influence the changing physical and human face of their neighbourhood.” Mark Saunders, Spectacle Founder.

DMAU specialises in documentary film-making and urban research. DMAU (or Digital Media Architecture Urbanism) provide a selection of participatory media in the form of visual essays, interviews and case studies.

The scope of this project spreads across various countries in the EU and works upon maintaining strong communities. It is therefore a good example of how participatory media can influence and support social development.

An accompanying interview with Spectacle founder Mark Saunders gives a broader understanding of how Spectacle works with communities to encourage social media. The interview explains the importance that participatory production workshops have, and the significance they have upon urban regeneration.

“The potentials for the use of documentary practice in urban research and design projects go much further than the traditionally formatted video production. New interactive documentaries combine film with a range of other media; photography, maps, soundscapes and data visualisations to create an immersive experience for the viewer. Next to this participatory documentary has the ability to empower and engage communities by bringing their story to a wider audience. We will see how interactive and participatory documentary is not simply about producing stories. It is as much about designing a storytelling process that engages with the voices of people impacted by an event or ongoing situation.”

Dear Well London participants and those yet to take part,

As part of the continuing Well London initiatives across London, over the next month we will be conducting what may be our final filming events and workshops in Hammersmith and Fulham, Kensington and Chelsea and Hounslow, starting tomorrow with a second visit to Notting Barns gardens. As always we are offering opportunities to get behind the camera and to learn how to shoot and interview.

If you can’t make it to these events or you are not so interested in filming, we are also offering edit placements where you can make a contribution to the Well London Media Project and get firsthand experience of the post-production process. All the information is in the flyer below. To find out more information about Spectacle’s role in Well London, visit the Spectacle blog.

Finally, Claire Sharples has sadly departed as project coordinator but leaves everything in the hands of myself and Mark Saunders. If you have any questions or want to get involved, please get in touch with the details below or download the Well London Media Project Sign Up Form and return it to us. 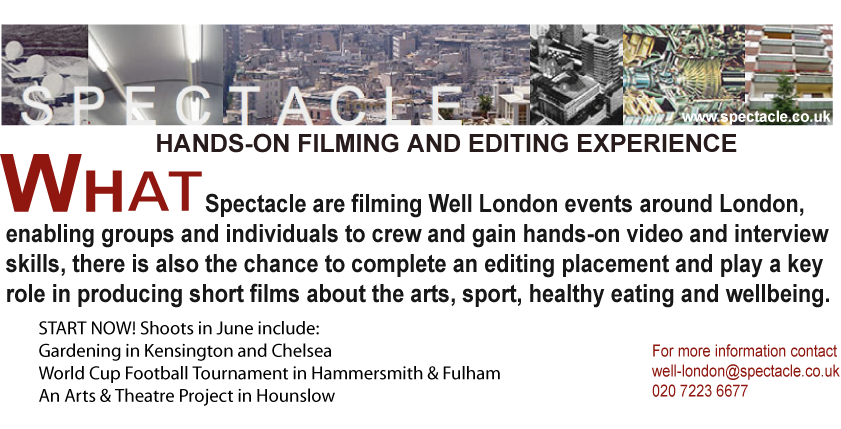