After having kept you in suspense with the “focus puller” problem, the moment has arrived to clear up all the doubts: Sam Rawlings has chosen to join us in the damp London instead of taking a short working trip to Italy. Well, that’s a relief!

Nevertheless, after doing the numbers we realised that something was wrong with the casting. We’re lacking two actors: someone representing the Middle East and someone from North Africa. The shooting will be in less than a week and there’s a weekend and a bank holiday before. We have to organise an audition and decide immediately who will be the new actors. We announce the second audition and in a few minutes we have printed out some new faces cv’s. We’ll risk our necks in a few hours and with a small sample of just eight actors. As if that wasn’t enough, we can’t use the same venue where we held the casting the first time. Fortunately, a charming Scottish security guy who greets us every morning with a “Buenos días, señorita”, suggests us to use the office next to ours. So we organise the audition and choose Rebecca Nasir and Rungano Nyoni, two young up-and-coming talents from London. Rungano forgot her appointment for the audition, right, but we know that she won’t forget the shooting day, will she?

Maybe the shooting day will arrive and we won’t have hands enough to set everything up and move all the furniture in the location, but we have at least our crew and actors: 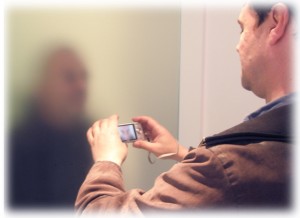 Is there any international frosting measure?

We have to find out how to get this look without damaging the glass floor. We find some stores next to the office where we can get a frosting spray, but we prefer a window frosting film that we’ve found in an online store, but we’ll need at least 3 working days to get it dispatched. As we said before, there is a weekend and a bank holiday before the shooting day. We’re running out of time, as usual. We call the providers and explain our problem. We give them the address of the location. If Karim isn’t there when they arrive, they can deliver it to Mark Carey, who fortunately lives in the same building. If he’s not at home, they’ll leave the parcel in his neighbour’s home. All the possibilities are catered for. We can just cross our fingers and hope Sam won’t run away to Italy, Rungano will remember her appointment with us and the frosting film will get to the location on time.

If you want to get more information about the project “Speak out against discrimination”, click here.

If you want to read the English version, click here.