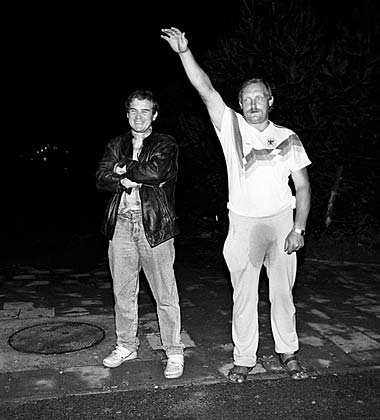 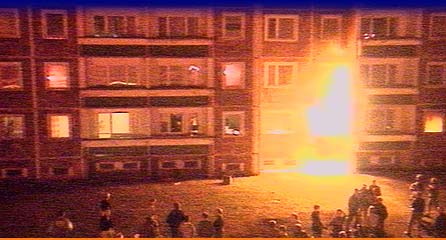 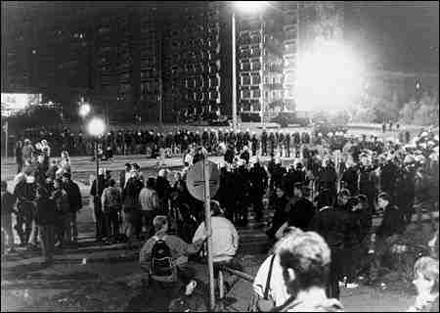 Poverty in the Media – Commissioning Priorities

Poverty is a problem faced by both individuals and society.

Societies commentators are an exclusive group, selected via a hierarchy and instated within a system, how representative can their voice be of the individuals who, because of the restrictions of their experience, do not rise through this?

The stories that find there way into the mass media produce a profound impact on the public subconscious; all mediated by the editorial chain, with whom the conditions are set and must be met to be accepted. The commissioning editors of both BBC and Channel 4 documentaries present similar priorities in their commissioning guidelines: Their requests come in loaded language – requesting proposals to match.

Hamish Mykura, Head of Documentaries for More 4 lists ‘harrowing’ ‘obsessed’ ‘extreme’ and ‘compelling’ in the descriptions for previous successes, the titles of which are equally charged (Eight Minutes to Disaster, Killer in a Small Town).
Alternatively, there is a focus on the ‘cheeky’ (BBC3) or the BBC4 equivalent ‘witty’, with both seeking ‘onscreen talent’ just as Channel 4 emphasises ‘presenter-led’ documentaries; encouraging programmes that are less focused on informative or critical worth and more (as requested by BBC3) the ‘entertainment values in their DNA’.

None of these criteria are detrimental in themselves but with this blanket approach to issue based programming, there is an obvious conflict of interests, the end point of which is arrived upon by Mark Raphael.

“I want to make ‘Risk Taking’ films that shed light on subjects we thought we already knew. ‘Provocative’ films that stir controversy, and ‘Popular’ films that thrill and excite large audiences.”

Mass appeal and commercial viability, are not criteria that encourage varied and responsible reporting. Industry checks may happen but if the material never leaves this sphere, pre-public release, there can be no dialogue. Fact checking, largely to avoid any potential legal repercussion, only happens to concrete information, not implication and is far more perceptible in specific rather than abstract cases. Where backlash does happen, it tends to pass more quietly than the impact of the broadcast programme.

When RDF went head to head with the Queen (A Year with the Queen, BBC, 2007) the BBC placed all blame with RDF, whose misleading editing meant producer, Stephen Lambert’s, head rolled. Now he’s back (as Studio Lambert) with Benefit Busters and RDF are free to continue with programmes, Wife Swap and The Secret Millionaire. It is not the representation, but the victim and resource with which they can respond, that affects the reaction – but the personal harm and perceptual effect is no less dramatic for those without recourse.

The power the media wields in propagating and reinforcing hegemonic ideals has long been recognised: The veil of entertainment and pretext that responding to audience choice, removes the onus from the media, only highlights the need for institutional change.

This is just one of the issues that Spectacle’s ‘Poverty and Participation in the Media’ project seeks to address; finding alternatives, opening up discussion and challenging what is seen to be the authoritative voice. The project was commissioned as part of the Joseph Rowntree Foundation’s ‘Public Interest in Poverty Issues’ campaign, and project content can be viewed online at:
www.spectacle.co.uk/poverty-and-the-media

The Unteachables, Channel 4 – A programme format is a license to produce and to broadcast a
national version of a copyrighted foreign television programme and to use its name

Programme formats are a major part of the international television market and they keep growing in popularity. With 11.6 million viewers previous Saturday X- Factor is a great example of the public’s desire for these type of programmes. The broadcasters love them too because of the large cost savings associated with avoiding the risk of inventing something original.

The most common type of formats are those in the genre of game shows, which quite often are remade in multiple markets with local contestants. Other key examples than X-Factor are Who Wants to Be a Millionaire, Survivor and Big Brother. However, there are also examples of documentaries as formats such as The Unteachables which Spectacle has been involved with.

On paper, formats don’t leave much room for creativity, nevertheless these programmes still seem to be executed differently in different countries. Does this mean that a TV format is a complex cultural product that cannot simply be reduced to a mere mechanical reproduction of a purchased TV programme? This might be a reasonable hypothesis when comparing The Unteachables with the Danish version of the programme titled Plan B.

ramme format is a license to produce and to broadcast a national version of a copyrighted foreign television program and to use its name.

Plan B, TV2 – the Danish version of The Unteachables

On the surface, the two versions of the programme seem quite similar. In both countries school children take part in a ground-breaking educational experiment investigating whether the school system is at fault, or the children are simply unteachable. In both cases the outcome of the experiment is positive: With the right teacher and learning methods by their side, even the worst behaved children can overcome their attendance problems.

However, when taking a closer look at the two versions, differences still occur – the two titles demonstrate this to great extent. Whereas the English version focuses on suspended school children the Danish one focuses on those children lacking confidence in school. Furthermore, in the English version the editing speed is faster and there is more focus on the children heavily using swear words.

How come these differences occur in the same programme format? Surely, a program will be executed differently by different producers, but is this a sign of the English media’s wish or need to be sensational and tabloid in order to attract greater audiences? It might also be worth taking into account the type of channels the programmes were broadcast on. The Danish channel TV2 prides itself on being an inclusive channel with the aim of unifying the public. On TV2 there are only winners – not losers.

Does this explain the differences or are the two school systems just too different to compare? Did Channel 4 portray a neutral picture of the English school system? Or do you think it is driven by sensational stories?

What about the Danish version? Is that a great example of how the school system operates in this country? Or is it too glorifying?

Have you experienced other versions of The Unteachables in other countries and how was the school system portrayed there?

You can find out more about Spectacle’s Class X project commissioned by Channel 4 to accompany the Unteachables series or order the DVD from distribution@spectacle.co.uk

Channel 4’s new show ‘Benefit Busters’ seems to be a PR gem for a government overseeing the biggest economic crisis in the past 30 years. Once again the numerous reasons why unemployment is soaring and more and more people are finding themselves in the ranks of the long-term unemployed is ignored in favour of the old-iddium- ‘people are lazy’. The concept is simple, an outside team come into the local job centre and teach all the unemployed the reason they have no job is their negative attitude.

It would be funny, if it wasn’t so mind-numbingly unoriginal and tragic.  That Channel 4 has managed to find a character that bares a striking  resemblance to ‘league of gentlemen restart officer Pauline’ in the form of Hayley, is a small triumph but the truth is that a this is a bad tabloid headline come to life and its harmful. ‘No jobs, rubbish! a pep talk from Hayley and suddenly your dreams come true, Poundland has an opening. In agony after a terrible accident, don’t worry if your benefits are cut and your on the breadline you will soon forget about your troubles’. Not only does it patronise those millions of people looking for work in an ever squeezed market, it attacks the weakest in society, the sick and disabled who have the least chance of finding employment.

This is best illustrated by the episode where Kieron, a young man on disability allowance, has his benefits cut after he was found to be ‘faking’ a serious back injury by one of the pep talk team. Now call me cynical but I always thought you needed extensive medical training and a few years working with patients before you could decide whether someone was ill or not, a bad neck tie and lipstick just doesn’t seem like enough.

With virtually no questions asked of A4E,  the private company involved in Benefit Busters or how much value for money we the tax payer are getting for this scheme, as opposed as to the old system, this is more like a  informercial for A4E than a documentary. Given that it is claimed A4E receive up-to £I94 per client per week and they have a limited amount of success, even in the program several clients failed to stay in work, more stringent questions should have been asked about the methods of this company.

Is it right that Emma Harrison, the companies founder, has become a millionaire through other peoples unemployment? If you make money from people being out of work can you be trusted to find them a job? Is Hayley the person to rummage through peoples deep-seated psychological problems?

I just wonder what Channel 4 will sink to next- ‘The poor and disabled, how  they bring it on themselves’.

For a further critique of Benefit Busters visit The Metro

For further information on our Poverty and the Media Project and to view our workshops please visit our Project Page.

From the makers of ‘Secret Millionaire’, ‘How the other half live’ is Channel 4’s new program dealing with poverty in the UK. Each week a rich family looks at the life of a poor family and at the end of the program gives a certain amount of money or ‘sponsorship’ to that family.

The makers of  ‘How the other half live‘ may have had the best intentions in the world with this program, asking the viewer to explore the gap between rich and poor, highlighting the poverty that exists in UK and encouraging people to be as generous with those who need help in this country as they are with those abroad, but it is still, as Keith Watson put it in the Metro  ‘patronising‘ and astonishingly contrived.

Instead of looking at the general picture of poverty in this country it focuses on a handful of ‘lucky’ people who are to become the benefactors of a handful of wealthy patrons. This view makes each episode an almost Dickensian style story of the hopeless poor being rescued by the good-hearted rich.

Having a nice easy solution at the end of each program, where a single familie’s problems are solved by a cheque book, actually masks the real issue of the thousands of other families who continue to live in poverty. It also fosters the idea that poverty is a personal issue to be solved by wealthy individuals rather than a societal issue to be dealt with by all.

What do you think?

Are these programs helping or hindering those in poverty?

What is wrong with rich people adopting poor families?