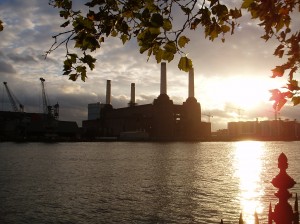 Be sure to register your views to Wandsworth Council before the February 1st deadline. 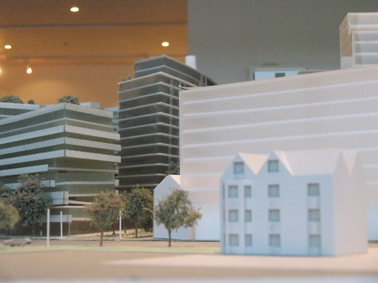 We feel that there should be better statistics behind this bald statement. The survey was self selecting through a simple questionnaire which literally asked to agree disagree or be unsure. There is no attempt to put the result in context of numbers of people responding.

On the 2 occasions we were at the exhibition there were few people attending. No notices to guide people to the exhibition and, apparently, inexperienced staff explaining the content of the models.

We fail to understand the purpose of this other than as PR during the period leading to the planning application when comments should be received at Wandsworth Council by February 1st 2010.

There is nothing on the exhibition to say that controversial plans to demolish the Grade II listed Water Pumping Station are applied for and that the demolition of the chimneys and rebuilding are proposed. I do know that the online petition on the subject of demolition of the iconic chimneys received over 600 votes to repair the chimney without demolition (PM web petition)

The questionnaire also asks the simple question to agree, disagree or not know if a tube line and station is supported.

Again, we know that the Minister for Transport Sadiq Kahn called the idea “humbug” and that there are no plans for the Government to financially support the tube line and that the Mayor of London has his own problems with a £5 billion deficit in the GLA transport budget so no money from there either.

Whitehill-Bordon has been designated an eco-town, where it is proposed to double the size of the existing town of 15,000.  There is strong popular opposition to what people see as a con trick to sell off MoD land and build lots of houses.  The result will be the opposite of eco: more carbon, more traffic, a job famine, thousands of trees felled, farm and other green land bulldozed and no real eco benefit, just an urbanised country town that fails all the original government criteria and has only been approved because the local Council supports it.  But the Council’s pre-determined ideas are being steamrollered through a combination of misleading propaganda, scaremongering, tame consultants, rigged consultation and, now political thuggery, with dissenting local councillors being replaced by local party members from distant wards.  The pattern is no doubt being repeated elsewhere in the country.

Read what Friends of the Earth have to say at:

“These developments could become the eco-slums of the future”